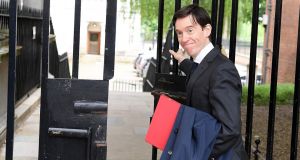 Rory Stewart has been rounded on by his fellow Conservative leadership candidates as they fear he has the momentum to take on Boris Johnson, while his background as a possible MI6 spy also came under scrutiny.

Mr Stewart, who started as a rank outsider, was accused by Sajid Javid, the home secretary, of being a Remain supporter despite having pledged to seek a Brexit deal and ruling out a second referendum.

Mr Javid, who went to a comprehensive school and further education college, also hit out at the idea that the two candidates in the final should be from similar backgrounds, saying it should not look to the country like “an Oxford Union debating society”. Mr Stewart, like Mr Johnson, went to Eton and then Balliol College, Oxford.

The insurgent candidate was also targeted by Michael Gove, the environment secretary, who attempted to halt the flow to Mr Stewart of former Remain-supporting Tories by writing in the Times that it would be “a mistake to put forward two candidates into the final round who will polarise our party”.

A source in the Stewart campaign said it would be “tight” as to whether he would make the jump from 19 supporters in the first round to 33 in the second, which takes place on Tuesday afternoon, but they believed they had just about enough pledges.

Well at least the other candidates are playing the ball not the man this morning...about to do @BBCr4today 🙂 pic.twitter.com/Ee47l4ba6v

His colourful past also came under scrutiny as he denied in a hustings ever having worked for the MI6 intelligence agency. However, the Daily Telegraph quoted security sources claiming that Mr Stewart had been employed as a spy for about seven years in his 20s. Another source who worked with Mr Stewart also told the Guardian it was well known he had worked for the intelligence services.

Mr Stewart was pressed again on his past in an interview on BBC Radio 4’s Today programme, where he again denied having worked for MI6. However, he said he would be bound by secrecy if he had been and pointed out that newspapers would be revealing official secrets by outing former spies.

Mr Stewart has been gaining ground and taking support off rival candidates over the last week, with two high-profile cabinet backers in David Gauke and David Lidington.

He took a number of backers of former leadership contenders Matt Hancock and Sam Gyimah, with sources in rival camps saying he was also picking up undecideds.

Mr Stewart has impressed colleagues with his fresh approach of walks across the country to talk to members of the public and recording his thoughts on shaky handheld video. Crowds of about 400 to 600 people have been turning up to some of his rallies but some MPs have criticised him for appealing more to Lib Dems and Labour voters than traditional Tories.

Mr Johnson is expected to cement his position as the favourite in another round of voting on Tuesday, while Mr Javid, Mr Stewart and Dominic Raab are all battling to get 33 votes from fellow MPs in order to stay in the race.

Each of the three camps suggested they were quietly confident of reaching that number if all MPs who had promised to vote for their candidate followed through on their pledge. If all reach it, the lowest-scoring candidate will drop out.

Jeremy Hunt and Mr Gove are already past that threshold so are likely to stay in the contest, but sources in their camps said they were not expecting a great increase in supporters on the last round. – Guardian