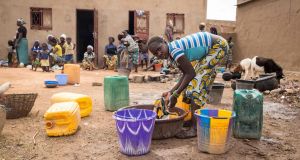 A girl washes clothes as families stand outside a school used as a shelter for Internally Displaced People from northern Burkina Faso in Ouagadougou. Photograph: Olympia De Maismont/AFP

More than 70 million people worldwide are fleeing war, persecution and conflict, the highest number ever recorded, according to the UN Refugee Agency.

The latest UNHCR Global Trends report warns that the number of people forcibly displaced has doubled over the past 20 years, with numbers significantly increasing from 43.3 million in 2009 to 70.8 million in 2018.

While most of the increase has been driven by the Syrian war, conflict in other areas such as Iraq, Yemen, the Democratic Republic of Congo, South Sudan combined with the massive flow of Rohingya refugees to Bangladesh has contributed to this rise, notes the report. In Ethiopia, more than 1.5 million people became displaced last year because of ethnic clashes in the south and west of the country, most of them within their own country.

By the end of 2018, an estimated 4 million Venezuelans had fled violence, insecurity, food and medical shortages and fear of persecution in their home country. Colombia and Peru have accepted the highest number of Venezuelans but many have also travelled to Brazil, Ecuador, Chile and the Caribbean islands. An estimated 5,000 people continue to leave the country each day while 5 million are expected to have left by the end of 2019, UNHCR has warned.

The number of refugees worldwide grew by 500,000 in 2018 to 25.9 million people, the highest number ever recorded. A refugee is a person who is forced to flee their country because of conflict, war or persecution. Nearly half the world’s refugees are children while an estimated 111,000 are alone and without their families.

The world’s poorest countries hosted one-third of all refugees worldwide in 2018 compared with countries in the developed world where 16 per cent of refugees live, underlines the report. For the fourth consecutive year Turkey hosted the largest number of refugees worldwide with 3.7 million people residing within its borders. It was followed by Pakistan (1.4 million); Uganda (1.2 million); Sudan (1.1 million) and Germany (1.1 million). In Lebanon, where the overall population is just over 6 million, one in six people in the country are refugees.

According to the report, just 593,800 refugees were able to return home in 2018, less than 3 per cent of the refugee population.

Asylum seekers – people who live outside their country of origin and are receiving protection but are awaiting the outcome of their claim to refugee status – made 1.7 million claims for protection in 2018 with the United States the largest recipient of individual applications.