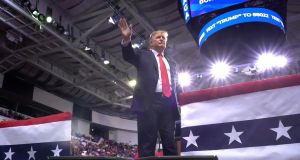 US president Donald Trump appears in his first 2020 re-election campaign advertisement, as he kicked off his campaign for a second term in the White House. Photograph: Donald J. Trump For President, Inc/Handout via Reuters

US president Donald Trump will launch his re-election campaign on Tuesday in Florida when he holds his first rally of the 2020 presidential season.

Thousands of supporters are expected to attend the event in Orlando, with lines forming outside the arena since late on Monday

“The Fake News doesn’t report it, but Republican enthusiasm is at an all time high,” Mr Trump tweeted on Tuesday. “Look what is going on in Orlando, Florida, right now! People have never seen anything like it (unless you play a guitar). Going to be wild – See you later!”

Mr Trump is due to take to the stage at the Amway center which seats 20,000 people, in Orlando around 8pm. According to the president, there has been more than 100,000 requests for tickets, with organisers building large screens outside the arena to accommodate the overflow.

The rally “looks to be setting records,” he said on Monday. “Our Country is doing great, far beyond what the haters & losers thought possible - and it will only get better.”

But Mr Trump’s appearance comes amid a background of weak poll numbers which suggest that the president could have an uphill challenge to win the election, which is still 17 months away.

The Fake News doesn’t report it, but Republican enthusiasm is at an all time high. Look what is going on in Orlando, Florida, right now! People have never seen anything like it (unless you play a guitar). Going to be wild - See you later!

Only Fake Polls show us behind the Motley Crew. We are looking really good, but it is far too early to be focused on that. Much work to do! MAKE AMERICA GREAT AGAIN!

It is not the only worrying set of polling numbers for Mr Trump as he begins his campaign for a second term as US president.

According to reports, internal polls commissioned by the Trump re-election campaign in March showed the president trailing Mr Biden in 11 key states, including swing states that Mr Trump narrowly won in 2016.

According to ABC News, Mr Biden had a 55-39 lead over Mr Trump in Pennsylvania and a 51-41 lead in Wisconsin, the polls found. Asked by ABC’s George Stephanopoulos about the polling in a wide-ranging interview released this weekend, Mr Trump replied that the polls did not exist.

The apparent leaking of the polling data has prompted the Trump team to fire some of the pollsters used by his re-election campaign.

White House officials did not deny the existence of the polls but noted that they had been conducted in March, before the completion of the Mueller investigation, arguing that Mr Trump’s support has strengthened since then.

Mr Trump challenged the findings of the polls in a tweet on Monday.

“Only Fake Polls show us behind the Motley Crew. We are looking really good, but it is far too early to be focused on that. Much work to do! MAKE AMERICA GREAT AGAIN!,” he tweeted, a reference to his 2016 election campaign slogan.

Tuesday’s event takes place a little over a week before Democrats hold the first debate of the primary campaign over two nights in Miami. The choice of Florida for the two parties is indicative of the outsized role Florida will play in next year’s presidential campaign. With 29 electoral votes the state has long been vital for presidential candidates to win. Mr Trump won the state by 48.6 per cent in 2016 over Hillary Clinton’s 47.4 per cent.