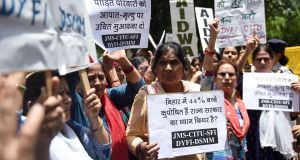 Indian women protest against the deaths of children in Muzaffarpur from a mysterious brain fever. Photograph: Money Sharma/AFP

At least 126 children, many of them less than 10 years of age, have died this month in India’s eastern Bihar state in an outbreak of encephalitis, commonly known as brain fever.

Health department officials in the state capital Patna on Tuesday said the largest number of deaths had taken place in Muzaffarpur, 72km to the north, and in a handful of surrounding towns and villages.

They said that the actual toll from Acute Encephalitis Syndrome or AES could be far higher, as many sufferers in remote villages were unable to reach government or private hospitals in Muzaffarpur.

According to news reports from the region, an additional 300 patients – mostly children between five and 10 – were being treated in crowded and germ-infested hospitals in Muzaffarpur by overworked doctors with limited resources and medicines.

In most of these hospitals there were four or five children to a bed.

“There are no good facilities here,” said Sunil Ram, father of a one-year-old girl who died, outside a government-run hospital in Muzaffarpur at the weekend. Had the facilities been adequate she would be alive, he added.

AES is a virus that triggers mild influenza-like symptoms of high fever, convulsions, headaches and even vomiting and occurs normally during the summer months.

Doctors said infants and elderly people were particularly vulnerable to AES, which was fatal if not treated in time.

They said AES also caused hypoglycemia – extremely low levels of blood sugar – that was life-threatening. It can also lead to coma, brain dysfunction and inflammation of the heart and kidney.

Doctors at a Muzaffarpur hospital said many children who survived the disease might have to live with “chronic neurological weaknesses”.

They also said the disease would abate with the onset of the monsoon rains that would end the heatwave gripping the state, with temperatures averaging 45 degrees over the past fortnight.

Meanwhile, medical experts also said that AES could have been prompted by a toxic substance contained in the lychee fruit grown in and around Muzaffarapur and harvested in June.

Locals said that during the season children in the area spent their days in lychee orchards eating the fruit on empty stomachs, following which many would develop AES-like symptoms.

Opposition leaders in Bihar, one of India’s most backward but heavily populated states, blamed local authorities for not implementing measures to deal with the anticipated AES outbreak.

One enraged parent confronted federal health minister Harsh Vardhan during his visit to a Muzaffarpur government hospital on Monday, taking off his vest and asking him what the state was doing to deal with the suffering children.

In 2011 and 2012, some 850 people, mostly children, died of AES in neighbouring Uttar Pradesh state and other north Indian provinces.

And in 2005 a virulent outbreak of Japanese encephalitis killed 1,000 people in Gorakhpur in Uttar Pradesh, close to India’s border with Nepal.