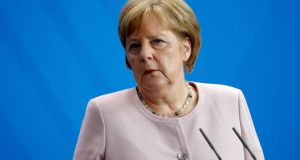 His remarks came a day after prosecutors said the main suspect behind the fatal shooting of a German politician had extremist links. Germany’s intelligence chief has refused to rule out that the killer had support of an informal neo-Nazi support network.

On June 2nd, Walter Lübcke, a senior Christian Democratic Union (CDU) politician in the central state of Hesse with pro-asylum views, was shot at close range in front of his home and pronounced dead two hours later.

Police say they have DNA evidence from the scene linking the killing to a man identified only as Stephan E. The 45 year old had a two-decade record of violent attacks against foreign nationals, asylum seekers and refugee facilities.

“A far-right attack on a leading representative of our country is an alarm signal and is directed at us all,” said Mr Seehofer on Tuesday. He told a press conference he was considering whether to issue a public warning to the wider population, indicating fears the chief suspect, now in custody, didn’t act alone.

Prosecutors insist they have no evidence the killing was anything more than the actions of a lone gunman with neo-Nazi links stretching back to the 1980s. But with the murder weapon still missing, fears are growing that the killing may be linked to a shadowy network that helped an underground neo-Nazi group carry out 10 fatal shootings stay under the radar and evade capture for a decade until 2011.

The chief suspect in the killing of Mr Lübcke was involved as a young man in stabbings and pipe-bomb attacks but had not attracted police attention since 2009, when he joined a neo-Nazi riot at a May Day rally in Dortmund.

“Whether he acted alone or whether he is part of a network is not clear at this time,” said Thomas Haldenwang, head of Germany’s domestic intelligence service, conceding the suspect may be a “sleeper”.

“In light of the scale of the extreme-right threat, we cannot yet say that we have mastered the threat,” he said.

Chancellor Angela Merkel has described as “depressing” the possible link between the killing and the far-right, adding: “I hope we’ll soon have clarity.”

According to reports, the dead politician’s name was on a list of far-right targets that includes a Social Democratic Party (SPD) state premier and a prominent television news anchor.

Attacks on politicians in Germany have been a rare occurrence since the early 1990s brought two near-fatal attacks on former finance minister Wolfgang Schäuble and ex-SPD leader Oskar Lafontaine.

The 2015-2016 refugee crisis has seen a rise in online hate speech and attacks against public representatives. Henriette Reker, the pro-asylum mayor of Cologne, was stabbed in the neck by a far-right extremist before local elections in 2015 and only narrowly survived.

“This terrible act shows us once again clearly that the enemies of our open society know no limits,” she said on Tuesday.