Majority of Tory members would give up Northern Ireland for Brexit, poll shows 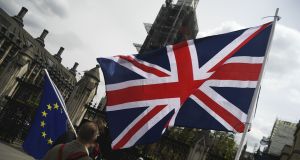 Pro Brexit demonstrators outside the Houses of Parliament. The YouGov survey of Conservative party members suggests that almost half (46 per cent) would be happy to see the Brexit Party’s Nigel Farage as their new leader. Photograph: Alberto Pezzali/NurPhoto via Getty Images

Conservative party members would be prepared to sacrifice the union, destroy their party or suffer economic damage to get the UK out of the European Union, a poll has suggested.

The YouGov survey of party members – who will decide the next prime minister – suggests that almost half (46 per cent) would be happy to see the Brexit Party’s Nigel Farage as their new leader.

Despite the strong support for Brexit, even if it had major repercussions, Conservative and Unionist Party members indicated they would be prepared to call it off rather than see Jeremy Corbyn enter Number 10.

The survey found that 63 per cent of members would be prepared to see Brexit take place even if it meant Scotland leaving the UK.

Some 61 per cent would rather Brexit took place even if it caused “significant damage” to the economy, 59 per cent would prioritise leaving the EU even if it meant Northern Ireland breaking away from the rest of the UK, and 54 per cent would accept the Tory party “being destroyed” in order to secure Brexit.

But only 39 per cent of the members who responded to the question said they would want Brexit to take place if it meant Labour leader Mr Corbyn becoming the next prime minister, with 51 per cent saying they would rather the UK did not leave the EU in order to avoid that happening.

The survey also found 26 per cent of Tory members would be happy to see Scotland leave the UK, as would 20 per cent be if Northern Ireland did so, regardless of the Brexit issue.

YouGov’s Matthew Smith said: “Conservative members are not just ideologically committed to Brexit – they also genuinely believe that the failure to deliver on the result of the 2016 referendum will bring about the destruction of the party’s electoral chances.

“Indeed, half [51 per cent ] of members believe that Britain ending up staying in the EU after all would damage the party to the extent that it will never lead a government again, and another 29 per cent think it would put the party out of power for multiple elections to come.

“By contrast, most members believe that successfully bringing about Brexit will win the Tories at least the next election.”

Another survey from Opinium found that a third of those who watched at least some of the Channel 4 leadership debate on Sunday thought Rory Stewart performed best.

Jeremy Hunt was second on 18 per cent, Dominic Raab third on 10 per cent, Sajid Javid had 9 per cent and Michael Gove was last with 6 per cent.

Among Tory voters who watched the show, 24 per cent thought Mr Stewart triumphed, narrowly ahead of Mr Hunt on 22 per cent. – PA