Vatican may allow some married men to become priests 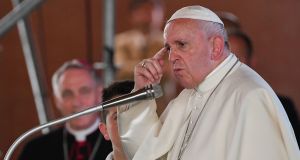 Pope Francis has said in the past that he would entertain the possibility of ordaining viri probati in remote areas that are deprived of the sacraments. Photograph: Tiziana Fabi/AFP/Getty Images

In a potentially groundbreaking move, the Roman Catholic Church on Monday cracked open the door to ordaining married, elderly men to the priesthood, to meet the pastoral needs of Catholics in remote areas of the Amazon.

The proposal would respond to the dearth of priests in the region by ordaining “viri probati,” or men of proven character, as they are known in Latin. It is the kind of exception to the celibacy requirement that church experts say – and church traditionalists worry – could be a step toward the ordination of married men in other areas of the world.

While affirming that “celibacy is a gift for the Church,” the Vatican document notes that there have been requests to consider, for the most remote areas of the Amazon, “the possibility of conferring priestly ordination on elderly men, preferably indigenous, respected and accepted members of their community.” Such men, the document said, could be ordained “even if they already have an established and stable family.”

Pope Francis has said in the past that he would entertain the possibility of ordaining viri probati in remote areas that are deprived of the sacraments. But he has also made clear that the church’s broader commitment to celibacy for priests remains intact.

The Vatican proposal was drawn up after consultations with Catholics in the Amazon region.

If the proposal is accepted, these married men would not be the first to serve as Catholic priests. The pope’s predecessor, Benedict XVI, permitted the ordination of some married Anglican priests who converted to Catholicism to serve as Catholic priests. And some Eastern Catholic churches that are in communion with Rome, like the Melkites and Maronites, have long allowed married men to become priests.

But an exception for remote areas of South America would be different, addressing an extreme version of the shortage of priests that plagues the church in many parts of the world.

The much-anticipated proposal marks a potential pivot for the church, especially in the Southern Hemisphere, where it sees its future.

The change was included in a working document for the Vatican’s upcoming summit of bishops in October in the Vatican to discuss the pastoral needs of faithful and indigenous communities in Bolivia, Brazil, Colombia, Ecuador, French Guiana, Guyana, Peru, Suriname and Venezuela – what it refers to as the Pan-Amazon Region.

The Vatican document also contains a proposal for an “official ministry” for women in the pan-Amazon area, though it does not specify what type of ministry. The Roman Catholic Church does not ordain women. Pope Francis had convened a panel of experts to study the history of women deacons in the early church, but he said in May that the panel’s findings were inconclusive.

Limited ordination of married men is consistent with Francis’ push to address different needs in different parts of the world, and to be more inclusive of people, even if they live outside the church’s usual dictates, said the Rev Giuseppe Buffon, a professor of church history at the Pontifical Antonianum University in Rome.

“The revolution for Francis is to give importance to the local populations and their cultures,” he said. “He is thinking locally.”

In the Amazon, “communities have difficulty in celebrating the Eucharist frequently due to the lack of priests,” said the working paper, released by the Synod of Bishops, the Vatican department overseeing the world’s bishops.

“For this reason, instead of leaving the communities without the Eucharist, the criteria of selection and preparation of the ministers authorized to celebrate it should be changed.”

Catholics in the region often go months or longer without seeing a priest and receiving the sacraments during Mass or going to confession. The document urges the bishops meeting in October to address the pastoral needs of these faithful and convert the church from one “which visits” to a “Church which remains.”

The Vatican proposal also suggests that the church better incorporate indigenous “music and dance, in native languages and clothes, in communion with nature and with the community.”

Sandro Magister, a Vatican expert at the Italian magazine L’Espresso, said that he was confident that allowing married priests in the Amazon would “open the door for other bishops’ conferences all over the world to allow married priests,” including in the heart of Europe. He said that German bishops, who have a strong liberal strain, would hold a synod on the same topic next year.–New York Times