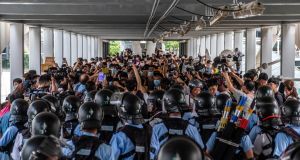 Hong Kong protesters flooded the streets, with rubber bullets flying overhead and tear gas in their eyes, ostensibly to protest an extradition law that could see suspects and fugitives sent over the border to step into the Communist Party’s quagmire of a judicial system.

But Hong Kongers have long known that Beijing does not feel obligated to use legal means if it wants someone back on the mainland – billionaires and booksellers and many more beyond have suddenly found themselves on the wrong side of the border in recent years. Abduction cases met with a shrug and impunity.

The protests have hit a deeper vein of anger and fear. The anger is at their own local government that turns a blind eye to these abductions, jails pro-democracy leaders, outlaws a political party, bans candidates from running in elections because they may hold pro-independence views, expels foreign journalists, pushes legislation that can only have a chilling effect, and generally adopts multiple ways and means to make Hong Kong look and act like any of its sister cities across the Shenzhen river.

The fear comes from watching the footage of the tanks roll in and around Tiananmen Square and crush unarmed students, and still 30 years on leaders asserting it was the right thing to do. The fear comes from news of detention centres in northwest Xinjiang that hold more than a million Muslim Uighers and other minorities, held because of their ethnicity, in structures Beijing calls vocational education centres.

They read of eerie Orwellian moments when on one of the rare occasions some foreign journalists are allowed visit one of these camps the “students” burst into song as they enter, singing and clapping along to “If you’re happy and you know it clap your hands”.

The fear comes from hearing about hundreds of young Tibetans self-immolating, because they see no other way left to express their despair. In their communities, pictures of the Dalai Lama are banned, but reports recently said households would get a 6,000 renminbi (€770) grant if they put up a portrait of President Xi Jinping instead.

The list goes on, and consequently a lot of Hong Kongers rarely or never cross the border. If they did, and dropped into cities such as Shenzhen, Chengdu or Wuhan, they would see thriving, modern, safe metropolises, where smartly dressed and well educated young people sip frappuccinos and discuss share values, property prices, schooling options for their kids, and the final episode of the Game of Thrones.

In their lives the Party tends to be everywhere, and yet nowhere. Only about 5 per cent of the population are members of the party – to get in you have to number among the best and the brightest – but having deep pockets or useful connections can also help with access.

Most steer well clear of the Communist Party, though, quietly get on with their lives, try to make a decent living and stay apolitical. One thing they know for sure: challenging the party’s authority is never going to end well so only a fool would go there.

To keep the lid on that percolating mainland scenario Beijing needs their mandatory nine-year period of education where the patriotic drum is well beaten, and they need to rigidly control the press, the internet, civil society and the judiciary.

And here is where the ideological clash comes with the Hong Kong youth, a cohort that was raised in a freewheeling, multicultural, dynamic realm. Docile acquiescence was never going to be on the cards around Victoria Harbour.

Rightly or wrongly, the British sailed out of that harbour on July 1st, 1997, on the royal yacht Britannia and they are not coming back.

The Chinese government is notoriously paranoid, but in reality no “hostile foreign forces” are lining up to storm Hong Kong. Hong Kong is China’s to lose. And while they might never lose the land, they run a very real risk of losing its unique spirit, and more beyond. The situation now in Hong Kong is febrile and could easily combust. Using heavy-handed tactics that have been utilised on the mainland will make a very bad situation irrevocably worse.

Beijing needs to take a step back and show its diplomatic skills to resolve this impasse, not its military ones. They must find ways to assuage the youths’ anger and fear.

For a government that holds the concept of harmony in great store, they can be sure – as Tiananmen still tells us to this day – that harmony does not come from the barrel of a gun.