Five line out for Tory leadership debate after Raab is eliminated

Boris Johnson got 126 votes in second round of voting, 80 ahead of nearest rival 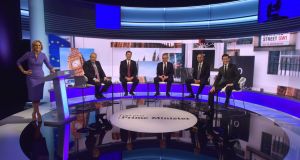 Former Brexit secretary Dominic Raab has been eliminated from the Conservative leadership contest just hours before the contenders battle it out in a TV debate.

Mr Raab, who got 27 votes last week, returned 30 votes in the second round of voting on Tuesday, three short of the qualifying threshold to stay in the contest.

Home secretary Sajid Javid, who got 23 votes last week, scraped through with 33 votes this time.

Earlier, Mr Stewart said he believed he had enough support “if everybody does what they say”.

Mr Javid had said he was “quietly confident” of making it through, adding that he was “looking forward to the debate this evening” — the remaining candidates appearing on the BBC at 8pm.

The home secretary, the state-educated son of a bus driver, urged colleagues to back him to prevent the contest looking like “a debate at the Oxford Union”.

Mr Javid, the only candidate left in the race not to have gone to Oxford University, said it would not be “healthy” for the party if all the candidates left in the contest had similar backgrounds.

He told BBC Radio 4’s Today programme: “If we end up in a situation where the final two, three, four even, are people from similar backgrounds with similar life experiences, it will look like a debate at the Oxford Union and I just don’t think that’s healthy for the Tory Party.”

The home secretary joked that his style was “less Homer’s Iliad and more Homer Simpson”.

In a sign that the contest is becoming more personal, a former aide to Mr Javid claimed Mr Stewart’s supporters were targeting the home secretary’s backers “urging them to vote for Rory so we can offer ‘something different’ in final two”.

Further votes on Wednesday and Thursday will see two candidates selected for the final ballot of Tory members, with frontrunner Boris Johnson almost certain to be one of them.

On Twitter, Mr Javid’s ex-special adviser Nick King added: “Saj’s dad was an immigrant. Saj went to his local comp and an FE College. Rory went to Eton and Balliol just like Boris.”

Mr Stewart, who has been forced to deny allegations that he had been a spy for MI6, suggested the claims about his background were the result of a rival “getting a bit rattled”.

His campaign has gathered momentum and won the backing of de facto deputy prime minister David Lidington, but he faces a difficult task to overhaul the vote tallies of rivals.

Mr Johnson, the clear winner in the first round of voting, will face his first televised showdown of the campaign when he appears at the BBC debate later.

He has secured even more pledges of support — including former leadership rival Andrea Leadsom — since winning 114 votes last week.

Foreign secretary Jeremy Hunt and environment secretary Michael Gove were the only other candidates to secure more than 33 votes in the first round.

Mrs Leadsom gave her backing to Mr Johnson on Tuesday morning, telling LBC he was the “best placed to get us out of the EU at the end of October” and an “election winner”.

Meanwhile, Mr Gove, who came third in the first ballot with 37 votes, used a Times article to say the final two candidates should “believe in Brexit” and be able to deliver it and unite the Tory party.

In an apparent reference to Mr Johnson and Mr Stewart, he said: “It would be a mistake to put forward two candidates to the final round who will polarise our party.” - PA