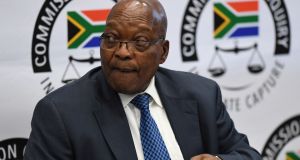 Former South African president Jacob Zuma has denied that the controversial Gupta family had any influence over his appointment of cabinet ministers during the nine years he was the country’s leader.

Mr Zuma made the assertion on Tuesday at the Commission of Inquiry into State Capture, Corruption and Fraud in the Public Sector, which is investigating if he was a central player in a public sector corruption scandal while in office.

Some of the whistleblowers who have appeared at the Johannesburg-based inquiry since it began last August have claimed Mr Zuma allowed Gupta brothers Ajay, Atul and Rajesh to hand-pick ruling party members who would do their bidding for cabinet posts.

In addition, witnesses have accused Mr Zuma and some of his government allies of bribery, facilitating tender fraud for the Guptas and logistics company Bosasa, and using his influence as president to bypass official regulations.

The Guptas and Bosasa chief executive Gavin Waston have denied any wrongdoing.

Last year former African National Congress (ANC) MP Vyjie Mentor said in evidence that Mr Zuma was present when she was offered the public enterprise ministry by Ajay Gupta at the Gupta family’s home, if she agreed to shut down a South African Airways India route.

But under cross-examination Mr Zuma denied he was present at the meeting between the pair in Johannesburg. He also maintained he never consulted the Guptas about the appointment of cabinet ministers.

Mr Zuma also denied playing a role in the sacking of former government communications chief executive Themba Maseko, who told the inquiry he was fired when he refused to co-operate with the Guptas over the state’s 600-million rand (€38 million) advertising budget.

Mr Maseko said he was approached by the Guptas to ensure their New Age newspaper received the government’s advertising spend, and that Ajay Gupta had said if he failed to comply his seniors would “sort him out”.

Mr Maseko was subsequently fired by the now deceased minister in the presidency, Collins Chabane, who he said told him Mr Zuma wanted him removed from his role.

Throughout Tuesday’s hearing, Mr Zuma repeatedly denied allegations made by whistleblowers that revolved around the Guptas’ influence over his presidency, or maintained he had no memory of the events described to him by evidence leader advocate Paul Pretorius.

Mr Zuma’s second day at the inquiry also started with the dramatic claim that he and his children had received death threats since he said in evidence on Monday that his troubles were down to a longstanding international conspiracy to end his political career.

The alleged plot, which he said he first became aware of in 1990 through an intelligence report, involved three intelligence agencies and members of his own party who had become spies.

Mr Zuma claimed the threat was made via a phone call to his personal assistant, who was told: “Tell Zuma we are going to kill him, his children and people around him.”

Later in the day, deputy chief justice Raymond Zondo, who is leading the inquiry, said they would investigate the threat against Mr Zuma and his family.

Mr Zuma is scheduled to continue giving evidence at the inquiry until Friday.