I sent a recipe for coq au vin, but he didn’t take the hint

Paris Letter: Maurice the rooster is talk of France, but he's not the one fowling up my mornings 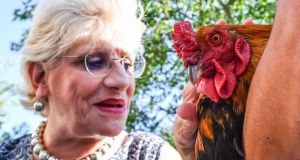 A woman admires Maurice the rooster as he sits in the arms of his owner, Corrine Fesseau (not pictured), in Rochefort, western France, on July 4th. Photograph: Xavier Leoty/AFP/Getty Images 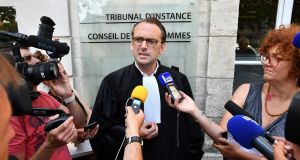 The lawyer of Corinne Fesseau, owner of Maurice the rooster, gives a speech on July 4th outside the court that heard a case taken against his owners for “nuisances related to their chicken-coop, most particularly the song of Maurice the cock”. Photograph: Xavier Leoty/AFP/Getty Images

The fate of Maurice the rooster will be announced in Rochefort district court, in the Charente-Maritime department of western France, on September 5th.

Maurice has become the most famous bird in France in the two years since a couple who are considered blow-ins filed a lawsuit against his owners for “nuisances related to their chicken-coop, most particularly the song of Maurice the cock”.

Maurice is a forbidding-looking beast of multi-coloured plumage, with a bright red crest and beard-like wattles hanging from his throat. He has his own Facebook page and was the subject of a solidarity march in his home town of Saint-Pierre-d’Oléron, population 6,700.

A “Save Maurice the rooster” petition launched online by his owner, Corinne Fesseau, a retired waitress married to a fisherman, has garnered 17,770 signatures.

Fesseau increased Maurice’s notoriety by photographing him in a yellow vest during the gilets jaunes crisis. Popular support for the fowl is perceived as another example of rural France getting its own back.

Except that Jean-Louis and Joelle Biron, the civil plaintiffs against Maurice, are not really city people. Both are aged 68, from a small town near Limoges. Jean-Louis was a farm mechanic, Joelle a low-ranking civil servant.

The Birons refuse to speak to journalists and did not appear in court when the case was heard on July 4th. Their lawyer, Vincent Huberdeau, told France Info radio they have been overwhelmed by publicity. Joelle Biron has spent holidays on the Ile d’Oléron, which is linked to the mainland by a causeway, since childhood. “They feel attacked, treated like foreigners, since the beginning,” Huberdeau said.

“My clients do not want the death of the animal,” the lawyer added. The chicken coop where Maurice lives, at the bottom of Fesseaus’ garden, is two metres from the bedroom of the Birons’ holiday home. The couple’s lawyer say they feel anxious when they go to bed at night, and cannot fall back to sleep after Maurice wakes them between 6 and 7 every morning.

The Birons spent hundreds of euro to have a bailiff observe Maurice’s morning cocorico, the sound that French roosters make instead of cock-a-doodle-do.

The rooster is France’s national symbol and an integral element of folklore. In the 17th century, Jean de La Fontaine wrote fables about a rooster who chose a piece of grain over a precious pearl, and a rooster who outsmarted a fox.

In Chantecler, the 1910 play by Edmond Rostand, the creator of Cyrano de Bergerac, a rooster called Chantecler believes his cry makes the sun rise.

Bruno Dionis du Séjour, the mayor of Gajac, 400 inhabitants, has proposed making sounds of rural France, including church bells, mooing cows and crowing roosters, part of French national heritage, as a prelude to having them included on the Unesco world heritage list.

Personally, I have a lot of sympathy for the Birons. In January 2018, prime minister Edouard Philippe gave a splendid black rooster with scarlet crest to Christophe Castaner, now the interior minister, as a 52nd birthday present. The rooster is named Doudou, a diminutive of Edouard.

My bedroom and office overlook the garden of the hôtel de Rothelin-Charolais, where Castaner worked as parliamentary liaison. When Castaner transferred to the interior ministry last October, I dreamed of peace and quiet. But one of Castaner’s predecessors had left four fierce hens in the interior ministry garden, so Castaner abandoned Doudou to his successor.

Doudou woke me on Tuesday at 5.20am. Sometimes he crows a little later, but he never misses a morning. Seated behind my computer, I see him strutting around the garden followed by the white hen who was provided for his pleasure.

My neighbours and I hoped the hen might calm Doudou, but the opposite seems to have happened.

Friends have suggested I take a shot at Doudou with a hunting rifle or a bow and arrow. I would not contemplate such folly. Lawsuits against the government don’t work either.

I’m surprised that a man as ambitious as Castaner ignores the aggravation he is causing voters. To me, Doudou’s cry symbolises the arrogance and indifference of politicians. Like Marie-Antoinette, who built a hamlet on the grounds of Versailles so she could play milkmaid, they like to imagine they have links with the country.

I sent a recipe for coq au vin to Castaner through a reliable channel. He never acknowledged receiving it. On national heritage day, my favourite neighbour left a bottle of red wine at the reception desk in the ministry, noting that it was for the coq au vin.

Some people cannot take a hint.