Hunt and Johnson: backstop is dead and can’t be in any EU deal

British prime ministerial candidate Jeremy Hunt says that the Northern Ireland backstop "is dead" and has vowed, along with fellow candidate Boris Johnson, to remove it from Brexit negotiations. Video: The Sun/Talkradio 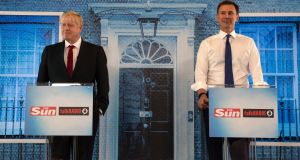 Boris Johnson and Jeremy Hunt have declared the Northern Ireland backstop “dead” and promised to throw it out of any deal they negotiate with the EU, in comments that significantly harden their Brexit positions.

The UK Tory leadership rivals both ruled out trying to tweak the backstop, which critics said could trap the UK indefinitely in a customs union with the EU.

They said it would not feature in any deal with the EU, saying it was no good to have a time limit on it or a way of the UK exiting it unilaterally - even though Eurosceptics had previously indicated they could vote for such compromises.

Pressed in a Sun and Talk Radio debate on whether he would seek a time limit to the backstop, Johnson said: “The answer is no. The problem is really fundamental. It needs to come out.”

He said his policy would be “no to time limits or unilateral escape hatches or these kind of elaborate devices, glosses, codicils and so on which you could apply to the backstop”.

“I think the problem is very fundamental. It has been devised by this country as an instrument of our own incarceration in the single market and customs union. It needs to come out,” he added.

Hunt agreed, saying “the backstop, as it is, is dead”, adding that there had to be a new way. “I don’t think tweaking it with a time limit will do the trick,” he said. “If we are going to get a deal we must have an absolute cast-iron commitment to the Republic of Ireland that we will not have border infrastructure. So what they liked in the backstop was the fact it guaranteed that. If we are going to solve that we need to find another way of guaranteeing that same thing.”

The EU has repeatedly ruled out reopening Theresa May’s withdrawal agreement to revisit the backstop, which Brussels regards as a way of protecting the Republic of Ireland and Northern Ireland from a return to a hard border between them.

However, both leadership candidates appeared categorical on Monday that they would throw it out of the deal entirely - or proceed to a no-deal Brexit. Hunt and Johnson endorsed the concept of “alternative arrangements” such as customs checks away from the border or trusted trader schemes.

They declined to say what would happen if MPs decide to block a no-deal Brexit, even as the House of Lords on Monday made moves to stop parliament being suspended to force it through. A cross-party group of peers launched their bid in the Lords this week, as they warned that the “procedural gambit” was needed to stop a “constitutional outrage”.

Philip Hammond, the chancellor, issued a fresh warning to Johnson and Hunt on Monday that he would do “everything I can” to prevent a no-deal Brexit.

The chancellor, who said he will not serve in the incoming government, insisted he would try to support the new administration. He added: “So long as they are focused on doing the things that will strengthen the UK economy and make it resilient in the future, I will be fully supportive. But if the new government tries to drive the UK over a cliff edge called no-deal Brexit, I will do everything I can to stop that happening.”

The two hopefuls to succeed May took a more conciliatory tone than in previous debates, with Hunt helping Johnson as he struggled with a question about his private life. Johnson was asked whether he would be taking his partner, Carrie Symonds, with him into Downing Street and he refused to answer.

“I’ve had a pretty ruthless rule on not commenting on that side of things and I don’t intend, if I may, to break it after 30 years,” he said.

Pressed on the idea that it was a trust issue with the public that voters should know who he would be living with in No 10, Johnson said: “I don’t want to get into any kind of presumptuous theorising about living in Downing Street at all.”

Hunt then joked that he would be living in No 10 and Johnson in No 11 as his chancellor.

However, Johnson refused to give a guarantee to Hunt that he would return the favour and put him in his cabinet, with talk reported among his allies that he will only appoint senior ministers who are thoroughly committed to implementing a no-deal Brexit if necessary.

Hunt said he would offer at least one of the four top cabinet roles to a female MP and Johnson agreed after some hesitation, but those commitments were criticised by former Tory MP Nick Boles who said they should be pledging gender balance at the top.

“I cannot believe Boris Johnson and Jeremy Hunt think they’ve done enough by promising one of the top four cabinet posts to a woman? They’re both blokes. So they think it’s OK for one out of top five jobs to be held by a woman! Seriously? It’s 2019 guys,” he said.