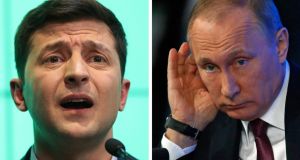 A week after Volodymyr Zelenskiy won Ukraine’s presidential election in April, Russian leader Vladimir Putin threw down the gauntlet to the erstwhile comedian.

Putin offered fast-track Russian citizenship to Ukrainians living in eastern parts of the country run by Moscow-led militants, in a move that he called a “humanitarian” gesture, the West denounced as dangerous and provocative, and which drew a bold statement of intent from political novice Zelenskiy (41).

“Ukraine will not give up its mission to offer an example of democracy to post-Soviet states. And part of that mission will be to give protection, refuge and Ukrainian citizenship to all those who fight for freedom,” he wrote on Facebook.

“We will give Ukrainian citizenship to people of all nations who suffer under authoritarian and corrupt regimes. And first and foremost to Russians, who today suffer most of all.”

The declaration was welcomed by Russian opposition figures who have already moved to Kiev, and by volunteers who have taken up arms for Ukraine in a five-year war with Russia’s proxy militia that has claimed more than 13,000 lives.

Members of both groups hope Sunday’s parliamentary election will empower Zelenskiy to make good on his vow and, crucially, to overhaul security services that have failed to prevent the murder of Kremlin critics in Ukraine and have even sent some back to Russia.

“I thought: Yes! Finally I have a president of my country that I am proud of,” Ilya Ponomarev, a former Russian deputy who received Ukrainian citizenship this year, said of Zelenskiy’s pledge.

“With this statement, Zelenskiy said Ukraine would be a torch and flagship for democracy... and have an open-door policy that would give it a great chance to attract the best talent from the whole post-Soviet space,” he told The Irish Times.

“Ukraine should take the initiative in the region and, with what Putin is doing to Russia, Kiev has more and more moral authority to do that.”

Ponomarev was the only Russian deputy to vote against Russia’s annexation of Crimea in March 2014, which Putin ordered after Ukraine’s Maidan revolution ousted the country’s Kremlin-backed president Viktor Yanukovich and tilted it towards the West.

A technology entrepreneur and long-time opponent of Putin, Ponomarev (43) was accused of facilitating fraud and barred from re-entering Russia after a trip abroad later that year, and he has been based in Kiev since 2016.

He gave evidence for the prosecution in Ukraine’s trial in absentia of Yanukovich, and Denis Voronenkov, a former pro-Putin deputy, intended to do the same after fleeing Moscow for Kiev in 2016 and taking Ukrainian citizenship.

On March 23rd 2017, the pair agreed to meet in an upscale hotel in central Kiev, but Voronenkov (45) never arrived.

Security cameras recorded how a man walked up behind Voronenkov and his bodyguard as they approached the hotel, and then pulled out a gun and shot them both, before standing over the stricken Russian and firing again at his head.

The gunman was a Ukrainian who died in a shootout with the fatally wounded bodyguard, but Ukraine’s prosecutor general blamed the murder on an “intertwining of interests” between the Kremlin, Russia’s FSB security services, and an alleged Russian crime boss who was the former partner of Voronenkov’s wife.

Russia denies all involvement in the murder, but the theory makes sense to Ponomarev, who has had more than one brush with danger since moving to Kiev.

In 2016 he was approached by a man posing as an Austrian businessman with close connections to Ukraine’s presidential administration, who suggested they discuss investment opportunities.

“We met three of four times but then I got a strange feeling about him. I thought he was probably a crook,” Ponomarev recalls.

The following year, Chechen fighter Adam Osmayev and his wife Amina Okuyeva were shot and wounded in Kiev by a man claiming to be a reporter for French newspaper Le Monde.

He was really an alleged Chechen hitman and the same “Austrian businessman” who had sought to win Ponomarev’s trust.

In October 2017, Okuyeva was killed when the couple’s car was riddled with bullets in an ambush outside Kiev. Osmayev survived, and blamed Moscow for ordering the assassination.

Okuyeva served as a battlefield medic and fought alongside Osmayev, who leads a battalion of volunteers from Russia, Georgia and other countries around the region who have chosen to fight for Ukraine.

While risking their lives for the country, however, volunteers found it extremely hard to secure Ukrainian citizenship from former president Petro Poroshenko, and some Russians were even sent back for trial in their homeland.

A Russian court last month gave an 18-year jail sentence to Timur Tumgoev, who was deported last September despite having fought for Ukraine, and in breach of a UN human rights committee order for Kiev to halt the process due to fears he could face torture. Russia says he was a member of a radical Islamic militia in Syria.

Tumgoev denied the allegation, and Halya Coynash of the Kharkiv Human Rights Protection Group – based in the eastern city from which he was deported – said his treatment shows that Ukraine’s SBU security service “has not reformed at all”.

“The SBU has a long tradition of collaborating with the FSB and it seems not to have changed ... With Tumgoev and other people who have clearly defended Ukraine, [deportation to Russia] just defies belief. And it’s not only that Tumgoev fought for Ukraine, but that there is also absolutely no proof of the charges against him.”

After Georgia’s former president Mikheil Saakashvili, now a politician in Ukraine, went into opposition against Poroshenko, the Georgian Legion volunteer battalion came under increasing pressure from the SBU and was forced last year to stop working with the Ukrainian military.

Mamuka Mamulashvili, commander of the Georgian Legion, believes elements of the SBU still co-operate with Russian agents that he blames for the death last year of his battalion’s Israeli spokesman Bari Bonen, whom the authorities said shot himself in the head in his Kiev apartment.

“But we already see things getting better under President Zelenskiy,” Mamulashvili says.

“We have been asked to re-join the army and last month he gave citizenship to 14 foreigners who have fought for Ukraine. Poroshenko promised to do it for five years and Zelenskiy showed it could be done in five minutes.”

Mamulashvili is now submitting to Zelenskiy’s office “a list of about 25 guys in the legion who want Ukrainian citizenship. There a couple of Americans, a Chechen and the rest are Georgians”.

Founded at the start of the war in 2014, Mamulashvili estimates that 150 foreign volunteers have fought for the battalion.

“We are fighting Russian aggression,” says Mamulashvili, whose homeland lost a brief war against Moscow’s forces in 2008, after which the Kremlin recognised the independence of two Georgian regions run by Russian-backed separatists.

“Ukraine is the last red line between the civilised word and barbarians who are trying to get to Europe. Everyone should understand that.”

Ponomarev, who was finally granted citizenship in one of Poroshenko’s last acts as president, is also eager to help Zelenskiy in a very different capacity.

“By getting Ukrainian citizenship I’m expressing an important political position against this war and everything Putin has done to put blood between our nations,” he said.

And what if Zelenskiy asked him to join the government after Sunday’s parliamentary elections?

“I said from the beginning that I would provide my professional expertise with the greatest pleasure,” Ponomarev replied. “I would accept, definitely.”