Some Republicans break ranks but president sticks by inflammatory comments 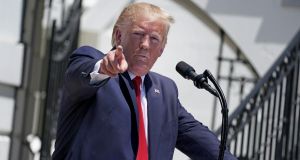 Donald Trump during his ‘Made In America’ product showcase at the White House on Monday. The president denied that his tweets were racist. Photograph: Chip Somodevilla/Getty Images

US president Donald Trump doubled down on his inflammatory comments about four female members of Congress, arguing that they should “apologise” to the country, to Israel, and to the president himself.

A day after he told the non-white members of Congress to “go back” to the “totally broken and crime-infested places from which they came”, Mr Trump said that he did not think his comments were racist. “These are people that in my opinion hate our country,” he said at an event in the White House. “They hate our country. They hate it, I think, with a passion.

“As far as I’m concerned if you hate our country, if you’re not happy here, you can leave. You can leave right now. I don’t know who’s going to miss ’em,” he said.

Earlier in the day he had accused the four women in a tweet of spewing “racist hatred”.

“When will the Radical Left Congresswomen apologize to our Country, the people of Israel and even to the Office of the President, for the foul language they have used, and the terrible things they have said. So many people are angry at them & their horrible & disgusting actions!” he wrote on Twitter.

When will the Radical Left Congresswomen apologize to our Country, the people of Israel and even to the Office of the President, for the foul language they have used, and the terrible things they have said. So many people are angry at them & their horrible & disgusting actions!

If Democrats want to unite around the foul language & racist hatred spewed from the mouths and actions of these very unpopular & unrepresentative Congresswomen, it will be interesting to see how it plays out. I can tell you that they have made Israel feel abandoned by the U.S.

Though he did not mention the four congresswomen by name, Mr Trump was referring to four recently elected members of the House of Representatives – New York representative Alexandria Ocasio-Cortez, Ilhan Omar of Minnesota, Massachusetts congresswoman Ayanna Pressley and Rashida Tlaib of Michigan.

All four are American citizens and only one, Ilhan Omar, was born outside the US. The Muslim congresswoman moved to the US when she was 12 with her family from a refugee camp in Somalia and was elected to Congress for the first time at last November’s mid-term elections. She has become the target of particularly vehement criticism from the right in recent days, specifically over her stance on Israel.

Mr Trump’s comments provoked international condemnation. In a rare rebuke by the British prime minister, a spokesman for Theresa May said that her view was that “the language which was used to refer to the women was completely unacceptable”.

The two Conservative leadership hopefuls also criticised the US president. Boris Johnson described the comments as “completely unacceptable” while Jeremy Hunt said he agreed with Mrs May, adding that he hoped it would “never happen in this country”.

Mr Trump also hit out at house speaker Nancy Pelosi during his press conference on Monday, accusing her of using racist language when she said that Mr Trump’s “Make America Great Again” slogan had always been in fact about making America white again. “That’s a very racist statement. I’m surprised she’d say that,” he said of the house speaker. He was speaking shortly after Ms Pelosi announced that the House of Representatives would vote on a resolution denouncing Mr Trump’s tweets.

While Republicans were largely silent on the issue on Sunday, by Monday some members of the party had broken ranks. Tim Scott, an African-American Republican senator, said that the president’s tweets were “deeply offensive”. Republican congressman Will Hurd also denounced Mr Trump’s tweets as “racist and xenophobic”.

Senator Lindsey Graham, in an interview with Fox and Friends, urged the president to “aim higher” when he criticised the members of Congress and focus instead on their policies. But he also vehemently attacked the four members, who are widely known as the “squad”.

“We all know that AOC [Alexandria Ocasio-Cortez] and this crowd are a bunch of communists,” he said. “They hate Israel. They hate our own country. They’re calling the guards along our border – Border Patrol agents – concentration camp guards . . . They’re anti-Semitic. They’re anti-America.”

1 Full line up of junior ministers unveiled as Taoiseach accused by one TD of snub
2 Bobby Storey: The IRA's planner and enforcer who stayed in the shadows
3 Who are the new junior ministers? All their profiles are here
4 Covid-19: Tourism chief to urge quick reopening of Ireland to overseas visitors
5 Coronavirus: Three more deaths, six new cases confirmed in Republic
Real news has value SUBSCRIBE