EU Commission presidential candidate Ursula Von der Leyen says that one of her priorities in the Brexit negotiations is maintaining peace on the island of Ireland. Video: EU Parliament 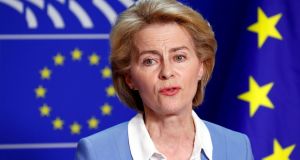 Ms Von der Leyen, a member of the centre-right European People’s Party, who was nominated two weeks ago by the EU leaders’ summit, saw her election narrowly ratified by 383 votes to 327. She needed 374 for a majority. The tightness of the margin may affect the European Commission’s ability to get its legislative programme through.

Speaking on Tuesday morning during the ratification debate, Ms Von der Leyen sent a strong conciliatory message to the UK in declaring that she would support another Brexit extension beyond October, “should more time be required”.

She said of the Brexit decision, to jeers from Brexiteers, that “we regret it but respect it” and reiterated the EU position that the Withdrawal Agreement as it stands “provides certainty where Brexit provides uncertainty” on citizens’ rights and peace and security on the island of Ireland.

The decision to allow a further Brexit extension will be one for EU leaders in the council, but Ms Von der Leyen’s words, certainly spoken after consultation with European Council president Donald Tusk, will be seen as an important signal to London that it may have more space to negotiate.

The MEPs’ vote on her nomination – formally speaking, it is they who “elect” her – is the final piece in a complex political package deal between leaders, in which they agreed the share-out of the EU top jobs between the union’s leading parties. Gender and geographical balance were also part of the equation, which ultimately depended on the willingness of MEPs to take instruction from national party leaders.

The presidency of the council has gone to Belgian Charles Michel, a member of the liberal Renew Europe group, while Spanish socialist foreign minister Josep Borrell was appointed high representative for foreign and security policy. France’s Christine Lagarde is to head the European Central Bank.

Ms Von der Leyen was supported by her own EPP group, which had won the recent European election, by the centre-left Socialists and Democrats, with defections from its German ranks, and by the liberal Renew Europe group.

Ms Von der Leyen gave an impassioned speech to MEPs in which she stressed her deep commitment to European values, not least the rule of law, and promised to put climate change at the top of her agenda. She said she would work to democratise the union, bringing the commission and MEPs closer together.

Once her presidency is ratified, Ms Von der Leyen will start the process of liaising with national leaders over their nominees for commissionerships, and on Tuesday she put down a strong marker that she will insist on a 50-50 male-female commission.  She warned that if member states refuse to supply her with female names she will not hesitate to turn nominees down.

Sources suggest, however, that she is unlikely to resist the renomination of male commissioners such as Ireland’s Phil Hogan.

Parliament votes on the commission as a block after individual hearings in September.