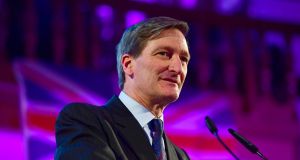 Former British attorney general Dominic Grieve has accused Boris Johnson of further radicalising on Brexit and leaving the United Kingdom with “starker” prospects by strengthening his stance on the Irish backstop.

Mr Grieve also accused the Tory leadership front-runner of making a “disgraceful” suggestion that would spell the end of democracy as we know it.

On Tuesday, Mr Grieve warned whoever becomes the next prime minister that their government will collapse if they pursue a no-deal departure from the EU.

The day before, Mr Johnson said in a head-to-head debate with leadership rival Jeremy Hunt that the backstop to prevent a hard border in Ireland could not have time limits or “unilateral escape hatches”.

Mr Grieve said Mr Johnson confirmed hardliners would “put up another obstacle” if anyone was able to solve the issue because it is being “used as an excuse because of this radicalisation”.

“When challenged and confronted, he radicalised even further and excluded any possibility of trying to negotiate some way out of the backstop at all. It had to go in its totality,” Mr Grieve said.

“The consequence of that is make it the choices starker and starker. I’ve always been willing as a politician to listen to people willing to come up with credible compromises, but what I’ve found so staggering about the Conservative leadership (contest) is it has been played to a tune of growing extremism.”

Speaking alongside Mr Grieve at a second referendum campaign event, Labour MP Margaret Beckett called the candidates’ backstop pledges “terrifying” and accused them of throwing “the Irish situation under a bus”.

“Nobody can say that that situation is now so peaceful it’s inconceivable that there will be further problems in the future. I think that’s an extraordinary demonstration of lack of responsibility to the country,” she said.

Pressed at the Sun and talkRadio debate on Monday, Mr Johnson had said the problem with the backstop was “fundamental”.

He added that the answer was “no to time limits or unilateral escape hatches or these kind of elaborate devices, glosses, codicils and so on which you could apply to the backstop”.

Unlike contest underdog Mr Hunt, Mr Johnson has refused to rule out suspending parliament to force Brexit through against the will of MPs.

Mr Grieve said it is an “astonishing” and “disgraceful” suggestion from the man most likely to be the next PM.

“It is unconstitutional, it is anti-democratic, it would in fact be the end of our parliamentary democracy, and it’s something which hasn’t been done in this fashion for such a purpose since the 17th century,” he said.

Mr Grieve and Mrs Beckett were speaking at the launch of a report for the People’s Vote campaign.

Entitled Six Dead-Ends, One Cliff-Edge, Only One Way Out, it argues that a second referendum is the only way to end “this never-ending crisis”, whatever the outcome. – PA