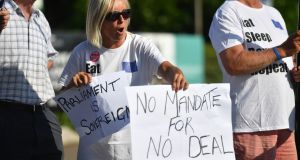 Boris Johnson came under renewed pressure on Monday to rule out suspending parliament to force through a no-deal Brexit, as peers debated amendments aimed at blocking such a move. Former Conservative minister Douglas Hogg said it was “truly lamentable” that a potential leader of his party should even contemplate proroguing parliament.

“Most members of this House, not least those of us who have served in the House of Commons, know that such an action would subvert the foundations of parliamentary government,” he said.

“It would also involve the monarchy in an intensely partisan controversy. We must take every proper and available step to frustrate that possibility.”

The amendments to the Northern Ireland (Executive Formation) Bill would require the government to update parliament every two weeks during September and October on progress towards restoring the Stormont institutions and that these reports would be debated and subject to motions.

David Anderson, a cross-bench peer, said that using such a procedural gambit was justified by the “extraordinary gravity” of what was being contemplated.

“This would not be a standard prorogation of parliament. The purpose of the prorogation extending beyond October 31st would be to bring about an irreversible change not just to our trade relations but to our central political and economic alliance, without putting anything in its place.

“If the House of Commons were to give its democratic approval to such a momentous step, of course it must happen – nothing in these amendments would impede, or is intended to impede, that – but for parliament to have its voice removed precisely because of its anticipated opposition would be astonishing, unconstitutional and without precedent in recent times,” he said.

Mr Johnson has said he does not wish to prorogue parliament but he has refused to rule it out, arguing that it is unwise to take options off the table as he prepares to negotiate with the EU.

The campaigner and businesswoman Gina Miller, who went to court to ensure that MPs had a vote on triggering article 50, has said she will take the government to court if it attempts to suspend parliament to push through a no-deal Brexit. She said it would be an abuse of power for the next prime minister to limit the voice of MPs.

“We think that it’s beyond the prime minister’s powers because parliamentary sovereignty is actually the jewel in the constitutional crown,” she told Sky News.

Mr Johnson is the clear favourite to succeed Theresa May as Conservative leader and prime minister next week when the votes of up to 160,000 party members are counted. But his rival Jeremy Hunt claimed yesterday that the contest was closer than most pundits believe and that many voters were switching from Mr Johnson to support him.

International trade secretary Liam Fox, who supports Mr Hunt, on Monday dismissed Mr Johnson’s claim that he could secure a trade deal with the US before Britain leaves the EU on October 31st.

“We can’t negotiate anything with the US until after we’ve left. It would be in breach of European law to do that,” Dr Fox said.