US Congress members and their immigrant connections 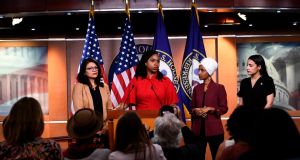 US representatives Ayanna Pressley speaks as, Ilhan Omar, Rashida Tlaib and Alexandria Ocasio-Cortez look on during a press conference to address remarks made by Donald Trump. Photograph: Getty Images

On Monday US president Donald Trump told four non-white members of Congress to “go back” to the “totally broken and crime-infested places from which they came”. Though he did not mention the four congresswomen by name, Mr Trump was referring to four recently elected members of the House of Representatives – New York representative Alexandria Ocasio-Cortez, Ilhan Omar of Minnesota, Massachusetts congresswoman Ayanna Pressley and Rashida Tlaib of Michigan.

All four are American citizens and only one, Ilhan Omar, was born outside the US. The Muslim congresswoman moved to the US when she was 12 with her family from a refugee camp in Somalia and was elected to Congress for the first time at last November’s mid-term elections.

Here are the countries from which first and second generation congress members are connected with.