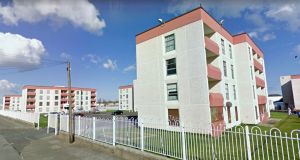 Structural defects in a 50-year-old block of Dublin City Council flats were caused by “excessive corrosion” left unchecked for years, according to an engineering report commissioned by the council.

The council last week had to undertake emergency works at the block of flats at Cromcastle Court in Coolock, after residents reported cracks and movements to the communal staircase that appeared to be coming away from the wall.

Scaffolding was immediately installed across the three floors of 16 flats and security guards contracted to prevent interference with the structural supports and provide assistance to vulnerable residents.

Barrett Mahony Consulting Engineers were engaged by the council to assess the damage. Their report, delivered on Friday, found movement and damage to the stairs and a “large gap” between landings and the stairs, which in their assessment was “not recent” and had been previously painted over.

“Steel reinforcing bars could be seen protruding from the underside of the half landing,” the report found, and it was likely that “excessive corrosion” of steel bars led to their failure “resulting in the stair flight movement”, it said.

“The corrosion is possibly linked to the frequent washing down of the stairs with detergents over many years. The joint between the precast flights and the landings were improperly sealed at construction stage or the seal has since failed. This has allowed penetration of water into the joint resulting in bar corrosion.”

The report recommended the installation of galvanised steel beams on all levels to support the staircase.

Local Solidarity councillor Michael O’Brien said the report posed similar concerns in relation to the remaining seven blocks in the complex of 128 apartments and they must now be assessed.

The complex had been due for demolition as part of a redevelopment of the area 10 years ago, but the plans were dropped when the property crash hit.

“Were it not for the current housing crisis these flats would have to be candidates for demolition,” Mr O’Brien said.

The council said it has instructed that all staircases in the other blocks be inspected and “works carried out as deemed appropriate”.