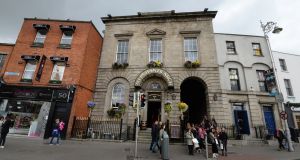 Owners of a prominent Temple Bar pub have been told by Dublin City Council they cannot turn the venue into a “superpub” despite approval from the circuit court for the expansion.

Thomas Doone sought permission from the council to extend the Merchant’s Arch Bar and Restaurant, which overlooks the Ha’penny Bridge and is considered one of the most important historical buildings on the south quays.

Last year Circuit Court president Mr Justice Raymond Groarke granted a declaratory order for a €1 million restaurant extension to the pub which ensured he would be granted a drinks licence for the development, if it secured planning permission.

However, the council has refused permission on the basis the development “would constitute a ‘superpub’ ” and would have a “detrimental impact on the historic fabric and character” of the existing pub and local area.

In his application, Mr Doone had argued the pub had to “turn away tourists every day” due to a lack of space to accommodate “double bus loads of tourists at one sitting”.

However, the council said the expansion would lead to an “over concentration” of pubs in the area and “undermine the character of the subject site, the streetscape and the amenities of nearby residents”.

The Temple Bar Residents group, Cllr Mannix Flynn and An Taisce made submissions warning the plans would turn the bar into a “superpub”.

An Taisce also advised that the development would negatively impact on the character of the pub’s protected structure, Merchant’s Hall.

Merchant’s Hall is one of only three guildhalls surviving in the city, along with Tailors’ Hall and Carpenters’ Hall. Following the laying out of Wellington Quay the Merchants Guild were offered a site for their new hall by the Wide Streets Commissioners, on the condition that a public right of way was maintained through an arch to Temple Bar.

The hall and arch were built by Frederick Darley in 1821. Following the disbandment of the guild in 1841, it became a boys’ school, and later a factory, before being used as a bar and restaurant from 1993.

‘It’s a leap into the unknown, a real baptism of fire’ - medical students graduate early 17:30
Dáil to sit in Convention Centre if vote for taoiseach needed 16:58
Surge in unemployment payments to more than 700,000 16:30
Coronavirus: Nearly all visits to children in detention suspended 16:28
Coronavirus: Orange Order cancels Twelfth of July parades 15:45