‘No-one in this country should feel isolated, discriminated against or bullied’ 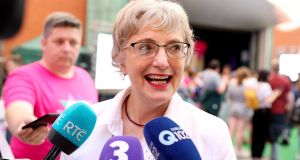 Minister for Children Katherine Zappone said every part of Government was whole-heartedly behind the new strategy. Photograph: Maxwells

They would also like the introduction and enforcement of hate-crime legislation, better access to mental health services and improved services for young people who are out or coming out.

These are among the findings in the world’s first strategy for lesbian, gay, bisexual, transgender and intersex (LGBTI+) young people, which was published on Friday by the Minister for Children Katherine Zappone.

The three-year strategy, which was drawn up with an advisory group of 14 young people, has a central principle that all young people should be “visible, valued and included”.

Its three main goals are to create a safe, supportive and inclusive environment to improve the physical and mental health of and to gather better data on young LGBT people.

Its 59 actions will be led by the majority of Government departments, and include the development of initiatives to reduce the risk of mental health problems for the community – to be led by the Department of Health and the HSE.

Another is to include LGBT matters in the current review of relationships and sex education in schools, to be led by the Department of Education, while the Department of Culture and Heritage, and the National Library are to “maintain, develop and enhance to Irish Queer Archive”.

Minister Zappone said she wanted the strategy taken seriously and said it “must achieve real results”. Her Department has committed €400,000 to improving youth services.

“Ireland has taken big steps in terms of equality. Decriminalisation, marriage equality and Gender Recognition Act are huge positives. But it is also clear more must be done,” she said.

“No-one in this country should feel isolated, discriminated against or bullied, yet this is a reality for some younger members of our LGBTI+ community.

“As Minister for Children I can commit that this strategy contains real actions which go a long way to addressing these concerns. Every part of Government is whole-heartedly behind this effort.”