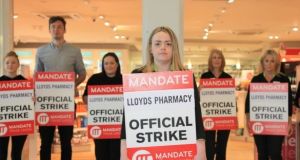 Workers at the Lloyd’s Pharmacy chain, one of the biggest in the State, say they will escalate their industrial action with three full-day stoppages in July unless management engages with their union.

Over 200 of the company’s mainly female staff will strike for three hours on Friday across almost 40 branches, over pay and conditions. This follows a two-hour stoppage last Friday.

They are seeking pay increases, an incremental pay-scale, an improved sick-pay scheme and an end to zero-hour contracts which they say some employees have.

The company will not engage with Mandate, which represents about 220 of the company’s 800 retail staff across its 88 branches.

In a statement to members, the union’s general secretary Gerry Light said: “If no breakthrough is achieved the company will leave us with no alternative but to take industrial action... We understand that this places a financial burden on you and your colleagues, and as such, we will be increasing strike pay.

“It is our sincere hope that Lloyd’s Pharmacy do not allow any of these actions go ahead and instead put their staff and their customers first by simply agreeing to allow their workers the representation they deserve by agreeing to the terms of the Labour Court recommendation.”

In a counter video to staff, Pat Watt director of Lloyd’s said the company’s ability to “do more” to improve workers’ pay and conditions was “heavily dependent on the profitability of our business”.

There were no pay cuts or job losses at Lloyd’s during the recession, he said, and last year a “very modest” return to profitability had been achieved.

“I have no doubt that this was due to your hard work and efforts. I tell you this because it proves the point that when we all pull together we can achieve great things. When we work as one team we all gain. I want our business to grow so that we can all gain further.”

As the opportunity to grow presented itself the “current industrial action threatens to snatch it away”, he said. The planned three days’ strike would mean over 40 hours’ of industrial action in total, and would send a negative “message to our customers”.

Lloyd’s management say they have established a Colleague Representative Council (CRC) as a forum for negotiations, and no further negotiating body is necessary. Mandate claims this is controlled by management.

Management denies the use of zero-hour contracts, saying staff work an average of 25 hours per week.

Mandate has tweeted photographs of contracts it says are between Lloyd’s and staff which include the clause: “Your normal hours are flexible as agreed with your manager, spread over five days between Monday and Sunday and may include late night and weekend work.”

With no guaranteed minimum number of hours these amounted to zero-hour contracts and banks would not lend to anyone employed on them, the union says .