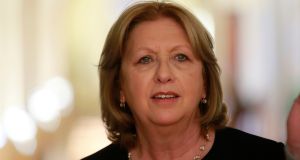 Speaking ahead of her inaugural participation in the Dublin Pride event on Saturday, where she will march with her son Justin and his husband, the former president said that what the church was doing to people in the LGBTI community was “unchristian” and “worse than uncharitable”.

“The only person who can actually stop that… is the pope,” she added.

In a public interview at the Co Meath headquarters of the Missionary Society of St Columban, to mark that organistion’s centenary, the former president declined to be drawn on this week’s spat between Archbishop of Dublin Diarmuid Martin and Minister for Arts Josepha Madigan over the role of women in the church.

However, she said “the curial, magisterial church is so far behind the curve [on the issue] it is embarrassing”.

Pope Francis was “a disappointment in relation to women”, she continued.

“I mean he is no different to any other pope on women. A few more appointments, but really? Seriously? They increased visibility, not voice. And they’re not going anywhere.”

She reserved her strongest criticism, however, for the church’s stance on LGBTI rights.

She said her son “loved the church” and then discovered “that same church has a view of him that is inimical to the way God made him”. It directed him “to retreat into the shadows of self-doubt, of misery of being really frightened”.

While she praised the pope for sparking new debates within the church, she regretted that “lovely statements” he had made about inclusivity had been removed from the catechesis of the World Meeting of Families, to take place in Dublin in August.

Rejecting the notion that the pope lacks full control over church affairs, Mrs McAleese said: “He is the pope; he is completely in control. The pope has full primatial powers.”

However, she added “this is a pope who has said from day one that he is never going to change doctrine… I have a problem with him even saying that. It’s a bit like a judge going into court and saying anybody who comes before me on a case of theft I’m going to sentence them all to 15 years in prison… that is trammelling on his own discretion. A judge wouldn’t be allowed to do that”.

“When the pope says he is not going to change doctrine there is something not right in my view about that.”

Citing “a lack of courage within the academy”, she said a culture of deference within the church was also impeding progress.

“It’s very, very difficult now for senior members of the church to speak with great honesty about these issues because they will be excoriated”.

Mrs McAleese said the nuns she had conversations with were “so far ahead of the posse” and she praised too the work of missionaries for raising consciousness of issues of international justice.

A further event to mark the centenary of the Columbans takes place at Dalgan Park, Navan on Sunday, July 1st - an open day for families with music and cultural exhibits that runs between noon and 5pm.