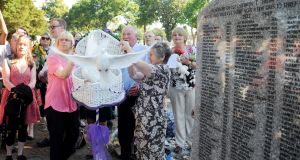 Doves are released at the annual Remembrance for the Little Ones in Mount Jerome cemetery in Harolds Cross Dublin today. Photograph: Aidan Crawley

The names of 240 children from the Bethany Mother and Child Home and other institutions were inscribed on a memorial stone at Mount Jerome Cemetery in Dublin on Friday.

Following extensive campaigning, the names of 224 other children were put on a separate monument in 2014.

Those attending the ceremony were reminded that the issue of mother and baby homes, and of the children who died in them, is not exclusive to Catholic-run institutions.

“While fathers were ignored, mothers were punished by being forced to hide their secret shame in the Bethany Home, or in the Church of Ireland Magdalen Asylum on Leeson Street,” said Dr Niall Meehan, speaking at the memorial’s unveiling.

“Children lived in these homes and, as is tragically all too evident, too many died there also.”

Dr Meehan said the memorials were a tribute to the tireless work of campaigner Derek Leinster and of John Thompson, whose research led to the unearthing of other disappeared children.

“Without Derek and John’s work, Irish society would be ignorant of those who were socially marginalised within all Christian denominations,” Dr Meehan said.

He added that more work was required in securing the handing over of institutional records to the State.