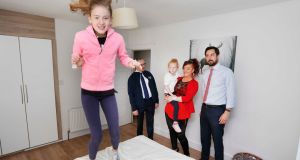 Only one vacant property has been refurbished in Dublin city, and nine nationally, under State-backed scheme which was to provide 800 social homes by the end of last year.

The first family to secure a home in the city under the repair and leasing scheme was handed keys to their new house in Ballyfermot on Friday by the Peter McVerry Trust.

The Government has set aside €140 million to secure 3,500 of the State’s 183,000 vacant homes for social housing by 2021 under the scheme. In February of last year then minister for housing Simon Coveney said he was “confident that the initiative can deliver up to 800 homes this year” at a cost of €32 million.

However, so far, just nine property owners have completed deals nationally, and just one has had their house rented to a tenant in Dublin.

The scheme allows local authorities to enter into long-term leases with owners of empty properties that are too rundown to rent out. Property owners can avail of a grant of up to €40,000 to bring their vacant houses and apartments up to standard. In return, they must sign up to a lease arrangement with their city or county council for a minimum of 10 years. The value of the repairs is offset incrementally against the rental income.

Refurbishment of the houses is expected to take two to six months, before they can be made available to social housing tenants.

The scheme was initiated on a pilot basis in October 2016 in Carlow and Waterford. In Dublin, where the scheme has been available since February 2017, when it was extended nationwide, the city council decided to earmark the housing for homeless families and use approved housing bodies to enter into agreements with landlords.

However, housing charities said they were unable to attract property owners to the scheme. Last February changes were made reducing the minimum lease term required from 10 to five years, and increasing the proportion of market rent payments to property owners from 80 per cent to 92 per cent, if they take on more responsibilities under the tenancy.

Additional funding over and above the €40,000 limit will also be considered where the property is a bedsit that is being brought into compliance with housing standard regulations.

Speaking at the Ballyfermot house yesterday Minister for Housing Eoghan Murphy conceded the take up of the scheme had been underwhelming.

“The repair and lease scheme in its first iteration didn’t deliver as we thought it might. We’ve just launched this new version of it, and we are seeing interest in it, and we have a few 100 now coming on line.”

Some 600 properties had been inspected and about 350 had been given approval for repairs, Mr Murphy said.

Pat Doyle, chief executive of the Peter McVerry Trust, said it had begun to see some interest in the scheme. “We are absolutely delighted to get our first repair and lease property over the line, and we promise that this will be the first of many. We have a pipeline of 23 that we believe we will deliver in counties Dublin, Kildare, Louth and Limerick this year.”

1 Tuberculosis vaccine ‘potential game-changer’ in Covid-19 fight
2 Coronavirus: Situation in Ireland ‘misrepresented’ because of limited testing
3 Coronavirus Q&A: How to shop safely during Covid-19
4 Remote control: Coronavirus is changing how Ireland is governed
5 We need to cancel the Leaving Cert and give students predicted grades
Real news has value SUBSCRIBE