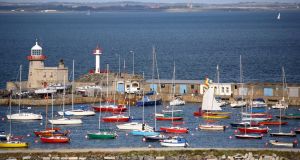 On a glorious sunny afternoon recently, I strolled around Howth harbour and it felt just like being on the south coast of France, lovely and warm and packed with people sitting outside enjoying their food outside the many restaurants on the West Pier.

These days, the West Pier has close on a dozen restaurants and an equal number of fish shops, even an art studio, all intertwined with the mechanics of a working fishing harbour, trawler repairs, net sales and all the other paraphernalia needed by fishing crews, adding to the authenticity.

Needless to remark, all these restaurant and fish shop developments have brought the pun brigade out, as with Nicky’s Plaice.

The West Pier is also excellent for walking, and the East Pier even better.

The history of the harbour itself goes back a long way, over 200 years. Construction on the east pier started in 1807, but after the collapse of part of that new pier, the great Scottish civil engineer John Rennie took over.

Ironically, the granite used to build much of the piers in Howth came from Dalkey quarry, which also supplied the same stone for the construction of its arch rival, what is now Dún Laoghaire harbour. The lighthouse at the end of the East Pier in Howth was built in 1817 and the adjacent lighthouse keeper’s house in 1821.

One of the historical oddities of Howth Harbour are the set of footprints at the end of the West Pier. King George IV visited Howth harbour on August 12th, 1821; he was described at the time as being in high spirits, in other words, gloriously drunk. A local stonemason carved the king’s footsteps on the pier, and they are still there today.

Howth harbour was built the wrong way round, so that it began to silt up very quickly. It had a brief tenure as the Dublin terminal for packet ships, but the traffic soon moved to Dún Laoghaire.

In more recent years, Howth harbour has seen much development of its marina, so the harbour is packed with yachts, adjacent to Howth Yacht Club.

A new middle pier was built for the fishing fleet, and the developments in recent decades within the harbour for trawlers have meant that Howth is now the biggest fishing port on the east coast.

The harbour is also noted for its RNLI lifeboat station, built in 1983.

Two lifeboats are on station there, an all-weather class boat and a D Class boat, the smallest in the fleet, but the real workhorse.

There are all kinds of other historical curiosities around the harbour, such as the old mariners’ church on the West Pier, once used by Scottish Presbyterian fishermen docking in Howth.

Between the Harbour Road and the harbour, the monument to all those lost at sea is a reminder of how treacherous the seas and the currents can be around Howth, while there’s also the modern, totem-like monument close to the entrance to the West Pier.

If you stand on either of the piers at Howth and look towards Howth itself, much of the skyline remains thankfully undeveloped, while St Mary’s Abbey dates from nearly 1,000 years ago.

One thing that struck me on my recent visit to Howth was how clean and tidy the harbour and the village itself were, with little sign of litter. Even the seagulls seemed quite magnanimous, well behaved even, taking it easy!

On land, the Martello tower, on the way up to Howth village, is now a vintage radio museum, packed with old radio sets, much nostalgia on the bygone stars of radio, and Morse code as well. Howth also has the national transport museum.

On the Dart coming back to Dublin, there were so many foreign tourists I hardly heard a word of English spoken.

Once the harbour in Kingstown, now Dún Laoghaire, drew away most of Howth’s maritime trade, but these days, the tourism barometer has swung in the other direction, in favour of Howth. The piers in Dún Laoghaire were also badly damaged in Storm Emma last March, whereas Howth largely escaped its ravages.

1 Steve Coogan: ‘Come Out, Ye Black and Tans is two fingers to the British’
2 Ben Affleck: ‘It took me a long time to admit I am an alcoholic’
3 Parties to continue talks with Sinn Féin despite Drew Harris’s IRA comments
4 My debating days: By Michael D Higgins, Mary Harney, Dara Ó Briain and more
5 Anti-Irish bigotry in Britain has not gone away
Real news has value SUBSCRIBE