Words ‘refugee’ and ‘asylum seeker’ should only arouse concern – Archbishop

Racism is nasty in its effects on men and women who need help, care, and respect 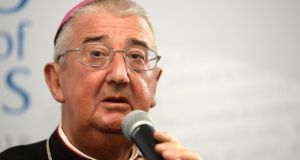 Archbishop Diarmuid Martin: ‘the Christian of every generation is called to be awake and attentive to where society is slipping into wrong ways.’ Photograph: Dara Mac Donaill/The Irish Times

The Catholic Archbishop of Dublin Diarmuid Martin has voiced his horror at “the emergence of a new language of racism” in Ireland after it became an issue in last week’s byelections.

Speaking at a Mass on Sunday to mark the 200th anniversary of Milltown’s Church of the Assumption, St Columbanus and St Gall in Dublin 6, he said that at Advent “the Christian of every generation is called to be awake and attentive to where society is slipping into wrong ways and to cry out like the prophet to return to the ways of God.”

In his own case, he said, “I think of the emergence of a new language of racism, at times understated in its expression but just as nasty in its effects on men and women who need our help, our care and our respect.

“I am horrified to find traces of such racism among believers. The terms ‘refugee’ and ‘asylum seeker’ should only arouse heartfelt concern in the Christian heart,” said Dr Martin.

Racism became an issue in a number of constituencies leading up to last Friday’s byelections.

Comments critical of asylum seekers by Fine Gael candidate Verona Murphy in Wexford and about Travellers by Fianna Fáil candidate Lorraine Clifford-Lee in Dublin Fingal sparked controversy, as did remarks in the Dáil by Galway West TD Noel Grealish concerning remittances to Nigeria.

Independent candiate Gemma O’Doherty, a failed Presidential candidate who polled less than 4 per cent in Dublin Fingal, has also attracted condemnation over her comments on the issues of immigrantion and multiculturalism.

Archbishop Martin also said on Sunday in Milltown that “a real challenge today for parishes in urban areas, marked as they are by greater mobility, is how to reach out and welcome those who move into a new area and invite them to be part of the faith community.That is my challenge to you for the future.”

Speaking at a conference in Rome’s Pontifical Oriental Institute, he said that “culturally a community has to develop an openness to migrants and help overcome the hostility towards migrants that can emerge and grow in any society.

“This can be especially the case when there is a belief that immigrants are taking employment or social service benefits away from the local population.”