Direct provision in Ireland: How and why the system was introduced 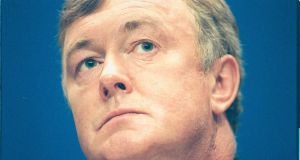 In January 2000, Fianna Fáil’s minister for justice John O’Donoghue was on the verge of bringing policy suggestions to Cabinet. His steerage of the issue had been attacked as a ‘shambles’ by the Progressive Democrats, the junior partner in government. Photograph: Peter Thursfield

At the turn of the century as asylum applications in Ireland were escalating faster than officials could keep up, the government was scrambling to find a workable system to deal with it.

In January 2000, Fianna Fáil’s minister for justice John O’Donoghue was on the verge of bringing policy suggestions to Cabinet. His steerage of the issue had been attacked as a “shambles” by the Progressive Democrats, the junior partner in government.

“Something is seriously wrong when all we get is an ad hoc policy instead of a comprehensive approach,” Liz O’Donnell, then minister of State for foreign affairs said, summing up the mood of the time.

Meanwhile, thousands of asylum seekers were arriving with nowhere in particular to go and could apply for State welfare (in 1999 the numbers would approach 8,000). Three-quarters of the public (74 per cent) wanted strict limits on numbers, according to a poll in The Irish Times. There was scant appetite for a liberal regime.

In Dublin, chaotic scenes unfolded at the refugee application centre in Mount Street, with queues of applicants and long delays in processing them. The pressure was becoming unbearable.

Anticipation began to build around a policy statement, some kind of plan to be delivered by the justice minister that would support his previously stated preference for direct provision. When it arrived in March 2000, it set out a major overhaul of the system that had existed prior to that.

O’Donoghue said the measures would respond to “crisis situations which result in relatively large numbers of refugees arriving in Ireland within a short period of time”.

Among a list of “major new initiatives” was the formal establishment of the Reception and Integration Agency which would take charge of services for asylum seekers and refugees. It would also steer “integration policy” for those given leave to stay in the country.

While acknowledging the need for efficiency in deportations (by then just 19 of 300 orders had been executed), the document dealt largely with the question of accommodation for those staying.

The government set out to build 4,000 permanent spaces as well as short-term solutions to deal with the situation, involving prefabs, hotels and guesthouses, mobile homes and even “flotels” (accommodation centres docked in port)s. The 4,000 spaces and flotels would never emerge. The ultimate failure of this early policy, as well as the unpredictability of annual migrant flows and demands on the system, would be felt years later by a different government scrambling to secure its own accommodation options.

Much of the early debate had to do with what rights asylum seekers should have in the labour market and what role they would play in Irish society.

While accommodation was to be provided on a “full-board basis” – direct provision – those in it would receive welfare payments of £15 per week (£7.50 for children). Whereas before, asylum seekers could access social welfare payments, this gradually changed. In a 2013 paper, UCD law lecturer Dr Liam Thornton explained that those claiming asylum before 2000 qualified for welfare in the same way as Irish citizens. As they were not allowed to work, they could not access unemployment-related assistance payments but they could get supplementary welfare allowance, amounting to much the same thing.

“In 1998 and 1999, the Irish government discussed the need to tackle the perception that Ireland was a soft touch in terms of welfare tourism,” he wrote, describing “increasing ministerial unease” at the situation.

O’Donoghue, he said, citing a letter he obtained between then justice minister and then minister for social, community and family affairs Dermot Ahern, had stated “that ‘every immigration service in Europe’ was telling him that Ireland’s welfare provision was acting as a magnet in drawing asylum seekers.”

Today, Dr Thornton is convinced European pressure was applied to Ireland to change this approach, ultimately achieved by the introduction of direct provision and its supplementary payments.

These concerns are confirmed by other sources. Two former cabinet members from different governments confirmed that economic “pull factors” had a major bearing on policy.

Was there an early effort to make Ireland an unattractive option for asylum? “There would have been, of course,” one said.

“The main problem was that there were so many bogus cases that it really took away the focus [from], and was unfair on the genuine applicants.”

Later, Dr Thornton told The Irish Times, as access to core social welfare payments was denied, shortfalls for covering everyday expenses such as children’s nappies and education and other costs was covered by the system of Exceptional Needs Payments. However, by 2012, this was cut to nappies alone.

In 2003, rent allowance was legislatively prohibited. In 2009 further legislation definitively excluded asylum seekers from all social welfare payments other than exceptional and urgent needs payments – although this broad access, Dr Thornton says, had been prevented in practice since 2005.

The State points out that those in the system are also provided with medical prescriptions, dental and optical care, pregnancy services and those relating to children’s health.

Another former senior government source said there existed “a strong cultural belief in the Department of Justice that work was a pull factor and if we allowed it, it would be an absolute factor [in numbers of arrivals]”.

In 2005, then minister for justice Michael McDowell said some commentators on asylum “refuse to address the very large abuse” of the system. More than 90 per cent of asylum claims at the time, he said, were “unfounded”.

This issue of whether asylum seekers should work was central to policy debate long before the numbers of asylum seekers accelerated. In 1999, Fine Gael TD Bernard Durkan presaged that “there is no better way to create antipathy to asylum seekers than by refusing [the right to work]”.

Other arguments would focus on humanitarian perspectives, and on the importance of integration, community involvement and financial self-sufficiency.

In early 1999, when the issue was prominent, Peter Cassells, general secretary of the Irish Congress of Trade Unions said the government ought to consider allowing work privileges for those awaiting application-processing on the basis they were being “exploited in the black economy”.

However, it was only in February 2018 that things would change. The Supreme Court struck down the absolute ban as being unconstitutional and today, limited access to work is available. Many underscore its importance.

“It’s only when that’s taken away from you, you realise then how important it is,” says Lucky Khambule, of the Movement of Asylum Seekers in Ireland (Masi) group. “You stay in that same mood of not knowing what you will do tomorrow except to eat and sleep.”

That state of inertia becomes more relevant when applied to the slow-moving asylum application process. In 2000, with about 50 new applications per day, the government committed to accelerating decisions. However, legal challenges have long been pointed to in cases where people have waited years for an answer.

“[Application times] were slow but they [officials] had to get an awful lot of information,” said a member of government at the time.

“And a lot of these people went to the courts and that was another reason why these things took a lot of time.

“People complained about the longevity and of course there were faults but in the early years we were avalanched with so many cases. The State didn’t really have the apparatus.”

Former justice minister Frances Fitzgerald says she s moved to introduce the International Protection Bill – which aimed to streamline the process and cut waiting times – when she saw the “disgraceful” amount of time people were left waiting.

Around the time the new legislation was brought in there was a backlog running to about 5,000 people in the system for over five years. According to Justice Mac Mahon, while progress was made in clearing that “bulge in the system”, the numbers again began to increase and the system again to “clog up”.

So, as with the accommodation problems of 20 years ago, the processing of applicants are again being aggravated by rising numbers.

But, Minister of State for Equality, Immigration and Integration, David Stanton insists, Ireland has “made huge improvements compared to what was there when it started”.

In 20 years, he says, more than 60,000 people came through the system which now has 38 functioning accommodation centres. “I would say there is no comparison.”