Expert says concerns around housing should not be linked to migrants 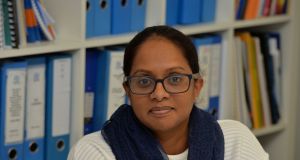 Lalini Veerassamy, chief of mission of International Organisation for Migration (IOM) in Ireland, has pointed to ways Direct Provision could be improved. Photograph: Alan Betson

The Government’s direct provision system for the housing of asylum seekers seeking international protection is not a bad system, the new head of the UN migration agency in Ireland has said.

Lalini Veerassamy, chief of mission of International Organisation for Migration (IOM) in Ireland, said she believed standards can be improved in the State’s accommodation centres in terms of gender desegregation and managing people with “different needs and vulnerabilities”, but that the State had a good system compared with other countries.

“I don’t think it’s a bad system. It can always be improved, of course. But I think the Irish Government is really trying to deal with that at the best of its capacity in a context where there is a housing crisis,” she said.

Appointed to lead the IOM in Dublin last month, the Mauritian lawyer said that the recent cases of migrants discovered in lorries in Ireland and England, including the 39 Vietnamese migrants found dead in a truck in Essex, were “the tip of the iceberg” in the terms of the scale of international trafficking of illegal migrants.

“It is happening far more than we think or the public thinks,” said Ms Veerassamy.

The migration expert who worked with the UN agency for 12 years in Africa said human traffickers can make up to €1.5 million from a single group of migrants smuggled on a lorry into a European country.

“It’s hugely lucrative today and if you also combine it with other transnational crimes, it’s a huge business,” she said, noting that people-trafficking gangs are often also involved in drugs and arms smuggling.

In her experience, migrants are willing to risk death from hypothermia or suffocation, as happened in the case of the Vietnamese migrants who died in the refrigerated Irish-owned trailer, in order to find a better life in another country.

The number of international migrants globally reached an estimated 272 million in 2019, an increase of 50 million since 2010. Ms Veerassamy estimates the bulk of these are economic migrants; about 10 per cent are refugees.

Responding to the controversial comments of Verona Murphy, Fine Gael’s candidate in the Wexford byelection, and Galway West Independent TD Noel Grealish on migrants, Ms Veerassamy called for “proper political discourse” on the issue of migration. She urged people not to link to more general public concerns around housing.

“How do we not fall into that game of just quickly targeting an issue where maybe the discourse should be a bit more reflective?” she said.

She believes the fact-checking by the Government and media in response to Mr Grealish’s claim, overstating the amount of money sent home by Nigerians in Ireland, would not happen to the same extent in other countries.

“I think that there is a very mature debate here,” she said.