How a Leitrim town resolved its direct provision row

A recent protest against a proposed centre for asylum seekers in Ballinamore was stood down after a High Court injunction, a local TD's car was also burnt-out in the area as tensions ran high over the centre. Video: Enda O'Dowd 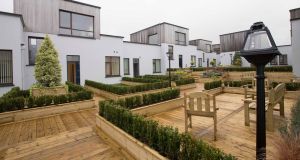 The decision to cut the number of asylum seekers going to Ballinamore, Co Leitrim, from 130 to just 27, made up of seven families, including children, will be seen in some quarters as a climbdown by the Department of Justice.

Pleased with the outcome, Gordon Hughes, one of the leaders of the group that protested against the initial plans, insisted that “at no stage did the town say no to asylum seekers, it was about being proportionate”.

Negotiations with Minister of State for Immigration and Integration David Stanton had taken place three times, he said, during which the group expressed concerns about childcare, medical facilities and other services.

Caroline Dempsey, one of the few Ballinamore locals willing to speak publicly in favour of the asylum seekers’ arrival, said she was “thrilled and relieved that any will be coming before Christmas”.

The people in Ballinamore are a very welcoming community; they had issues, they had concerns, they had questions and they wanted what was going to happen to work

The own-door apartments in the Rock Quarter complex earmarked for the incoming families are a significant improvement on the direct provision accommodation that has been repeatedly condemned by human rights activists for more than 20 years.

The apartments are bright, warm and well finished. Each is fully furnished and kitted out with kitchen appliances, bedding, crockery and cutlery. Families will have independence, privacy and a semblance of normality.

Each has a small garden area as well as balconies with views over the town. A management office on-site will help residents with issues like enrolling in school and accessing GP services, as well as providing security.

Dempsey, who says she faced angry telephone calls due to her views, and Sinn Féin TD for the area Martin Kenny both say locals felt under pressure to join the protest: “[It was] as if you were either with them, or against Ballinamore,” Mr Kenny told The Irish Times.

Paul Collins, the owner of Remcoll Capital, which owns the apartments and which for a time had staff blocked by round-the-clock protests , said he was “delighted”.

“I look forward to welcoming the families to the Rock Quarter Apartments,” said Mr Collins, who bought the apartments in early 2019 from a Northern Irish fund manager that had, in turn, bought them from a receiver.

Pleased that an agreement has been reached, Mr Stanton said he accepted the need to hear local communities’ concerns: “That’s what I want to do all the time and that’s what we did in this situation.

“The people in Ballinamore are a very welcoming community; they had issues, they had concerns, they had questions and they wanted what was going to happen to work,” he said on Friday.

However, Friday’s diplomatic words were a far cry from the swift opposition that emerged in mid-October once it became known that Remcoll was about to sign contracts with the Department of Justice to accommodate asylum seekers.

The unfinished apartments had lain idle for nearly a decade. This summer, Mr Collins applied for a Department of Justice accommodation tender. Word spread on October 14th that agreement was near. Two days later, contracts were signed.

A public meeting was held that night. Mr Collins went, believing he would talk about Remcoll’s plans to invest €30 million in the area over five years, providing 37 new houses, a 100-bed nursing home, an IT and employment hub and a coffee shop.

“But I realised very quickly the only thing they were interested in was the refugee centre. I was astonished there was so little interest in this major investment. It wasn’t a great advertisement for investing in Leitrim to be honest,” he told The Irish Times.

Within days, tempers had flared further. By the Sunday, one local, James O’Connor, who had spoken in favour of the asylum seekers at that first meeting, claims he was told to “shut your mouth”.

Mr Kenny was a particular target for abuse. One text he received read: “Yourself and your colleagues in Sinn Féin are traitors to the Irish. Hopefully you are executed like the dog you are.”

In the early hours of Monday, October 28th, his car was set ablaze outside his home in Aughavas, Co Leitrim, while he and his family slept. A man was arrested in Co Tipperary in relation to the incident, but later released without charge.

A 2m-high wire fence was erected at the site of the apartments as part of efforts to obstruct workers from completing work there. Entrances and exits were also blocked and it was claimed workers were intimidated. An attempt was made to set fire to the Tesco supermarket which is part of the complex.

The protest was lifted when Remcoll obtained an interim High Court injunction preventing protesters from interfering with completion of the works. The matter is back before the High Court on December 6th.