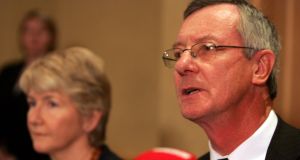 Justice Seán Ryan, chair, and Anne McLoughlin, a member of the confidentiality committee, at the launch of Commission to Inquire into Child Abuse Report, in Dublin in 2009. Photograph: Eric Luke

The Retention of Records Bill 2019 proposes to seal records from the Commission to Inquire into Child Abuse, commonly known as the Ryan report, and the Residential Institutions Redress Board in the National Archives for 75 years.

Four survivors of industrial schools appeared before the Oireachtas committee on education, alongside human rights law and data rights experts on Tuesday.

Mary Harney, who was born into a mother and baby home in 1949, told the committee of the current difficulties survivors had in trying to access information about themselves. There was “absolutely no valid moral or constitutional reason” why survivors’ own testimony to the Ryan commission would be sealed, she said.

“If this Bill passes it would make survivors of the industrial schools invisible once more,” she told the committee. “I was told my mother was dead, it was a lie... When we try to access our records there are so many barriers in our way,” Ms Harney said.

“Our memories were wiped from us and now we are asking ‘can we have them back please’... Don’t traumatise us any more, please let us have our records,” she said.

Minister for Education Joe McHugh has said sealing the records for 75 years was necessary to respect the original confidentiality provisions of the commission and the redress board.

Carmel McDonnell Byrne, a survivor who helped set up the Christine Buckley Centre, said the State apology over abuse in residential institutions was being “undermined” by the new legislation.

Ms McDonnell Byrne said there was still “too much secrecy” around the past abuse and subsequent inquiries. “We were the forgotten children and now it looks like we could be the forgotten adults,” she told the committee.

There is a provision in the Bill to allow for a review of the timeline on releasing the files 25 years after it becomes law.

Dr Maeve O’Rourke, a human rights law expert who in the past has advocated for survivors of Magdalene Laundries, said the Bill would deny survivors answers and accountability.

Catriona Crowe, head of special projects at the National Archives, was also highly critical of the legislation.

Ms Crowe told the committee that a redaction process could allay concerns that releasing the records would identify individuals who were accused of abuse but not convicted, or other confidentiality fears.

There was no reason current legislation governing the publication of records in the National Archives after 30 years was not sufficient for the abuse records, and the proposal to seal them for 75 years was “using a sledgehammer to crack a nut,” she said.

Eileen Molloy, another survivor who gave evidence to the committee, said providing survivors access to their own records “might be the door we all need”.

“We’re pushing on in years, I’m going to die not knowing... I want to know the answers, and if they’re going to be locked up for 75 years my children will most likely not see them,” she said. “It’s a human right, and we’re human beings, we’re not statistics,” she said.

The committee decided to defer a decision on the legislation and have sought a response from Mr McHugh on the concerns raised by survivors and legal experts.