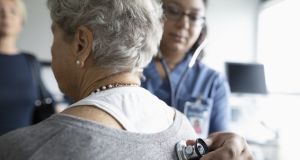 In the last 18 months 250 people were trained in the area of frailty care, and they in turn trained 2,500 health care providers. Photograph: Getty

More than 2,500 health care professionals have been trained in the area of “frailty” as part of an emerging shift in approach toward our ageing population.

A conference on Tuesday heard that by 2051 there will be about 1.7 million more people in Ireland – those aged 80 and over will increase by 270 per cent.

In the last year-and-a-half 250 national facilitators were trained in the area of frailty care and they in turn trained 2,500 health care providers including nurses and physiotherapists.

The approach is a collaborative effort by the National Clinical Programme for Older Persons and those behind the Irish Longitudinal Study on Ageing in Ireland (Tilda).

Addressing Social Justice Ireland’s population growth conference in Dublin, Dr O’Shea said the training would make a difference as part of a shift toward focusing care models at home and in the community.

“Scattered around Ireland now are loads of frailty education networks,” he said. “Loads of integrated care sites looking to make these changes locally because locally driven change is a better form of change.”

Although Ireland is facing challenges due to its ageing population, the conference heard that given it has the youngest European population alongside Cyprus, there will be opportunities to learn from others.

Nevertheless, future projections outlined by James Hegarty of the Central Statistics Office (CSO) are stark – the percentage of the population aged 65 and over will increase from 13.3 per cent in 2016 to 18.1 per cent by 2031 and to 24.6 per cent by 2051.

While today there are five people of working age for every person aged 65 and over, that will be halved within that time span. Similarly, the current number of working age people for every dependent person (those aged between 0 and 14, and 65 and over) will fall from two to less than 1.5.

Given Ireland’s comparative youth in a European context, Mr Hegarty said there should be an “opportunity to plan… implement good policy and learn from the experience of others”.

The issue of major demographic shifts is not lost on the public or politicians – Mr Hegarty said that a recent CSO population and migration estimates were re-tweeted 77,000 times, including by Taoiseach Leo Varadkar.

Ireland’s migration experience has also changed in recent years to one where the pace of immigration has outstripped emigration – in the two decades to 2016 some 20,000 more people arrived every year than left.

Dr Sean Healy of SJI, considering the data, noted the “implications for policy are dramatic”.

Sean Moynihan of the charity Alone said much of the debate around how to plan for an ageing population was complicated by blame attribution and negative language.

“An ageing population is not a catastrophe, it’s not a time bomb… it’s success,” he said. “We have to get rid of ‘pension time bomb’ [language] and [images of] wrinkles on the hands.”

Mr Moynihan said loneliness as a health issue was a “huge emerging need” – statistically, those who are alone will die about six years younger than those who are not.

Other data presented showed that in terms of housing policy, 15 to 25 per cent of older people would opt to downsize from their homes but lack the opportunity or availability of alternative accommodation. One third currently live alone in homes with up to four bedrooms.

Just 4 per cent of people end up in nursing homes but yet, Mr Moynihan said, despite 30 years of government policy on assisting people to remain at home, there were 900 fewer care packages given to people as of last June.