Seven families to be housed in Leitrim direct provision by Christmas

A recent protest against a proposed centre for asylum seekers in Ballinamore was stood down after a High Court injunction, a local TD's car was also burnt-out in the area as tensions ran high over the centre. Video: Enda O'Dowd 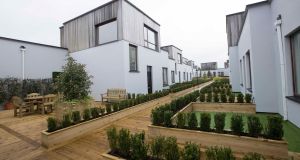 In all, 27 people will take up residence in seven of the 25 self-contained apartments, in the Rock Quarter, while they await completion of their asylum applications.

It is understood the families may move in as soon as this weekend.

In a statement issued on Thursday, Minister of State for Immigration, Equality and Integration David Stanton said he had had a “very constructive and open” meeting with “community representatives” from Ballinamore on Wednesday.

The Department of Justice and Equality said Mr Stanton welcomed “the positive progress made at the meeting and, as a result, seven families (27 people) will move from emergency accommodation into the Rock Quarter apartments before Christmas”.

The Minister “committed that there will be further full engagement and consultation with the community in the new year. The department confirmed to the group that it has no plans, whatsoever, to open any other accommodation centres in Ballinamore, other than the existing 25 Rock Quarter apartments, which will cater exclusively for families.”

The news last month that the vacant apartments just off Main Street were to be used to accommodate up to 130 asylum seekers prompted heated public meetings and a round-the-clock protest outside the apartment complex.

A 2m wire fence was erected around the building, entrances and exits were blocked and construction personnel were obstructed from finishing works. An attempt was made to set fire to the Tesco supermarket under the apartments.

On October 27th a car belonging to local Sinn Féin TD Martin Kenny, who spoke out against the protest, was set on fire outside his home.

The picket was lifted when Remcoll Capital, owner of the building, earlier this month obtained an interim High Court injunction preventing protesters from interfering with completion of the works.