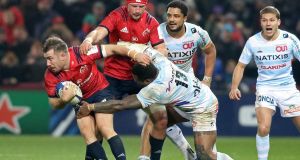 It is an age-old rugby rivalry, but when it comes to breaching the class divide, Munster are far better sports than Leinster.

A major new study has found that while rugby’s association in Dublin with better-off, private schools appears to hold true, Munster rugby is a more inclusive affair.

“The picture is striking. The gradient in the likelihood of playing rugby by educational attainment is weaker in Munster than it is in Leinster,” states Rugby in Ireland: A Statistical Analysis of Participation, which was produced by the Economic and Social Research Institute (ESRI) on behalf of the Irish Rugby Football Union (IRFU).

“The obvious implication is that rugby in Munster has a broader social base, perhaps contributing to its higher rate of active participation overall.”

However, “participation remains substantially lower among the group with lowest incomes in Munster.”

Authors Pete Lunn and Elish Kelly say: “To some extent, the socio-economic profile of rugby doubtless reflects its heritage and tradition.

“But the broader socio-economic spectrum of rugby players that exists in Munster is proof, if it were needed, that there is nothing intrinsic to the game that makes it attractive only to the better-off in society.”

Sport and physical activity surveys between 2003 and 2017 show a “clear scope” for the expansion of the women’s game, even though four in five children playing today are male

Insufficient data was available on Connacht and Ulster to include them in the analysis, but the authors did explore the gender question on an all-Ireland basis.

Sport and physical activity surveys between 2003 and 2017 show a “clear scope” for the expansion of the women’s game, even though four in five children playing today are male.

Just over 1 per cent of adults play regular rugby compared to 10 per cent of children under the age of 13, raising a “challenge” surrounding drop-out.

IRFU spokesman Stephen McNamara said it had already acted on baseline data and insight from the ESRI.

“The report has influenced the development of new rugby offerings to increase the participation of new communities with modified formats like Play Rugby and XRugby [with reduced intensity contact] and the creation of female-specific programmes in schools and clubs.”