Government caught between contesting passions over retention of abuse files 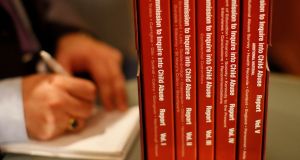 There are other issues which haven’t been fully ventilated. Mr Justice Sean Ryan alluded to one of these when saying that religious congregations may complain about “a barrage of criticism on the basis of unproven or extravagant or extreme . . . allegations” which may be contained within the records but did not feature in the commission’s final report in 2009. Photograph: AP

From rural Ireland, Tomás has spent most of his turbulent life abroad. The detritus left behind included intermittent employment, a failed marriage, effective abandonment of his children – now adults themselves, years of serious drug abuse, confused sexuality and promiscuity, and serious bouts of life-threatening illness.

A conversation with his ex-wife one night offered clues about an underlying trauma. Then, he began to tell his story of brutal sexual abuse by a local priest over a sustained period, and less serious sexual abuse by another priest who also was a teacher in his secondary school.

Peers of his had also been victims of the first priest. One later died by suicide. Others got on with lives seemingly as turbulent as his own. But on one matter Tomás was very clear: He did not want his story told. Nor did he want it reported to the Garda or the Catholic Church. He did not want the focus, the attention or the embarrassment – even if he was no longer in Ireland.

I want to know the answers, and if they’re going to be locked up for 75 years my children will most likely not see them

He didn’t want his name in public – Tomás is a pseudonym – as he made clear when first speaking to this reporter in 1998. Yes, he appreciated it was not his fault; he was a child. But he still felt ashamed. He could not bear the idea of people looking at him and thinking of what his main abuser had done to him. He preferred to be seen as the man others perceived him to be, however unfavourably.

Today Tomás’s view hasn’t changed. His abuse took place in a setting outside of the scope of State-backed inquiries into historical child sex abuse so his story was never documented. But, like a good number of the abuse survivors who testified to those bodies, he would be horrified at the thought of a future historian opening up a file about him in years to come.

Approximately 1,400 former residents gave evidence to the Ryan commission’s investigation committee, and a further 1,090 to its confidential committee.

Speaking of the need to honour commitments given to witnesses, Mr Justice Ryan told The Irish Times last May: “From the survivors point of view, they gave their evidence on the basis of legislation of 2000 and 2005 that has, as far as possible, absolute protection.

“There’s a prohibition in the legislation from revealing the identity of the person giving evidence in the private hearings, but also on giving information that might lead to the identification of the person.”

People gave evidence to the confidential committee on the basis that “it was utterly confidential, full stop, end of story”.

When the historical relevance of the files was put to him, Mr Justice Ryan responded “that’s for others to judge. But, can it be done? Well, leaving aside any views I might have, as a lawyer I can see there are complications.”

The Retention of Records Bill 2019 proposes sealing the documents in the National Archives for 75 years. A provision in the Bill would allow for a review of the timeline on releasing the files 25 years after it became law.

At least one survivor appealed in writing to the Oireachtas Committee on Education and Skills, which is considering the legislation, to keep the records confidential, saying many others shared his view. However, four survivors of residential institutions argued otherwise before the committee last Tuesday.

Eileen Molloy, who had been in an industrial school from the age of 11 months until she was 16, said: “We’re pushing on in years, I’m going to die not knowing

. . I want to know the answers, and if they’re going to be locked up for 75 years my children will most likely not see them,” she said. “It’s a human right, and we’re human beings, we’re not statistics.”

Mary Harney, who had been in the Good Shepherd Industrial School at Sunday’s Well in Cork, said there was “absolutely no valid moral or constitutional reason” why survivors’ own testimony to the Ryan commission would be sealed”.

The Bill, if passed “would make survivors of the industrial schools invisible once more,” she said.

Catriona Crowe, former head of special projects at the National Archives, was also critical of the proposed legislation. Loss of the records “or the inappropriate restriction of access being contemplated, would be a significant and profound loss to historical scholarship on 20th century Ireland,” she said.

“There was no reason current legislation governing the publication of records in the National Archives after 30 years was not sufficient for the abuse records, and the proposal to seal them for 75 years was “using a sledgehammer to crack a nut,” she said.

However, there are other issues which haven’t been fully ventilated. Mr Justice Ryan alluded to one of these when saying that religious congregations may complain about “a barrage of criticism on the basis of unproven or extravagant or extreme . . . allegations” which may be contained within the records but did not feature in the commission’s final report in 2009.

Regarding the commission’s work, Mr Justice Ryan said “the report is not an iceberg. What’s in the report is everything”.

The committee has sought a response from Minister for Education Joe McHugh on the concerns raised by survivors and legal experts before deciding what to recommend.