UCD says it will be represented at Cardinal Newman canonisation 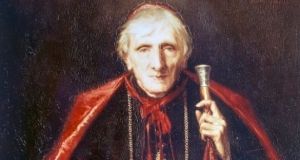 Cardinal Newman, a convert to Catholicism from the Church of England, came to Ireland in 1851 at the invitation of then Catholic archbishop of Dublin Paul Cullen to be the rector of a new Catholic University, now UCD. Photograph: Getty Images

UCD has announced it will send a representative to Rome next Sunday for the canonisation of its first rector Cardinal John Henry Newman.

In a statement, UCD said: “In light of the Government decision to send Minister for Education, Joe McHugh, to represent the Government at the canonisation of John Henry Newman, UCD will be represented by Vice-President, Professor Orla Feely. ”

The decision follows criticism of the university from former UCD registrar Prof John Kelly who said he believed UCD was being “extraordinarily narrow-minded in not recognising this great honour that its being awarded to its founder, with the excuse that as a non-sectarian university, it would be inappropriate that it should.”

Earlier this week, a UCD spokeswoman told The Irish Times there would be “a number of UCD folk in Rome”, but did not elaborate.

She added: “Although John Henry is the founding rector of our antecedent, the Catholic University, we have been a secular university since 1908 and consequently are not invited in a formal capacity.”

Newman was first rector at UCD and founder of its Literary and Historical Society. He also delivered seminal lectures on higher education, titled The Idea of a University, while rector there from 1854 to 1858.