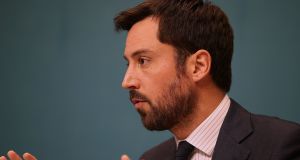 Minister for Housing, Planning and Local Government Eoghan Murphy said he was ‘disappointed’ parties on the council were rejecting a deal they themselves had formulated. Photograph: Stephen Collins/Collins Photos

Minister for Housing Eoghan Murphy has accused Dublin city councillors of “hypocrisy” following their threats to block the regeneration of the former O’Devaney Gardens flat complex in Dublin 7.

Councillors on Monday night deferred a decision on whether to approve the redevelopment of the site by Bartra Capital to allow talks with Mr Murphy.

Councillors had been expected to overturn a deal, agreed by the previous council in 2017, that would have seen more than 800 new homes built at O’Devaney Gardens, 30 per cent of which would have been used for social housing, 20 per cent for affordable purchase and 50 per cent for private sale.

The previous council led by Sinn Féin had approved the agreement by 53 votes to eight, with , Fine Gael, Fianna Fáil, Labour and the Green Party also supporting the deal.

Labour, the Green Party and Sinn Féin had planned to reverse their support on Monday night, with other parties raising concerns about the terms of the deal. Fine Gael remained in support of the agreement.

In a four-page letter sent to Lord Mayor of Dublin Paul McAuliffe on Monday, Mr Murphy said if the deal was overturned it would result in a “very significant deferral in the provision of much-needed housing in this prime city-centre location” and that funding from his department “will also be lost if elected member decide not to proceed with important project”.

Following his Budget 2020 speech on Wednesday, Mr Murphy said he was “disappointed” parties on the council were rejecting a deal they themselves had formulated.

“I am very disappointed in the position that some of the parties have taken which is a u-turn on the previous position that they held. I’m not sure if the councillors themselves agree that position or it has been a diktat from on high, but I think it’s a very worrying development in terms of the provision of housing in Dublin and the hypocrisy we have in some parties.”

However, he said he would meet with councillors to try and progress the development.

The council is already building 56 social homes on the site. Bartra has been chosen to build another 768 houses and apartments, 411 of which would be sold privately by the developer, 192 would be used for social housing and 165 would be sold to qualifying affordable housing purchasers.

The council’s head of housing Brendan Kenny said affordable homes would be available for sale at an average cost of €300,000 and that none would cost more than €320,000, the maximum qualifying price for the Government’s Rebuilding Ireland home-loan scheme.

Separately, Mr Murphy said €2.63 billion would be spent on housing next year. More than 7,500 social homes would be built, more than had been built at the height of the boom when 6, 800 homes were built in 2008.