‘Should be very proud, even boastful, that he was the founder and first Rector’ 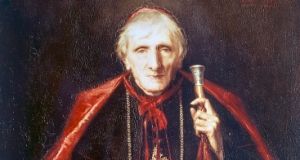 Cardinal Newman, a convert to Catholicism from the Church of England, came to Ireland in 1851 at the invitation of then Catholic archbishop of Dublin Paul Cullen to be the rector of a new Catholic University, now UCD. Photograph: Getty Images

A former UCD registrar has described as “extraordinarily narrowminded” a decision by the university that it will not be officially represented at the canonisation of its first rector Cardinal John Henry Newman in Rome next Sunday.

However, the absence of a representative from UCD was criticised by Prof John Kelly, registrar at the Dublin university from 1986 to 1994.

“I am indeed sorry to say that I believe UCD to be extraordinarily narrow-minded in not recognising this great honour that its being awarded to its founder, with the excuse that as a non-sectarian university, it would be inappropriate that it should.”

He believed “this attitude will both puzzle and reflect badly on it across the international university world.

“Imagine if Queen Elizabeth said that as Britain is a non-sectarian State, we cannot therefore recognise or take part in this canonisation ceremony next Sunday. Stuff and nonsense, quite the reverse – and the British nation will be fully represented at the ceremonies in Rome next Sunday.”

Prince Charles will represent Queen Elizabeth at the ceremony, along with 13 cross-party MPs and peers from Westminster as well as UK ambassador to the Holy See Sally Axworthy and the prime minister’s special envoy for freedom of religion or belief Rehman Chishti MP.

The University of Oxford will be represented by Neil Mendoza, Provost of Oriel College, where Newman was a fellow and Dame Hilary Boulding, president of Oxford’s Trinity College, where he was an undergraduate.

Newman, a convert to Catholicism from the Church of England, came to Ireland in 1851 at the invitation of then Catholic archbishop of Dublin Paul Cullen to be the rector of a new Catholic University, now UCD.

A UCD spokeswoman told The Irish Times there would be “a number of UCD folk in Rome”, but did not elaborate. She added that: “Although John Henry is the founding rector of our antecedent, the Catholic University, we have been a secular university since 1908 and consequently are not invited in a formal capacity.”

The university confirmed to Prof Kelly that it would not be officially represented at the canonisation.

Newman was first rector at UCD and founder of its Literary and Historical Society. He also delivered seminal lectures on higher education, titled The Idea of a University, while rector there from 1854 to 1858.

Prof John Kelly appealed “to my alma mater, UCD, that it does not hesitate in recognising this great honour being awarded to its founder and, even at this late stage, in being formally and fully represented at this ceremony next Sunday.”

Newman, he said, was “one of the great literary figures of the 19th century and UCD should be very proud, even boastful, that he was the founder and first rector of that University which in later years changed its name to University College Dublin. ”

Prof Kelly pointed out that the academic structures which Newman “set up in his short four years as its rector, operating out of 86 St Stephen’s Green, now and long since known as Newman House, are largely still in existence, as is the Students Society, the Literary & Historical (L&H) which he took great pride in setting in motion.”