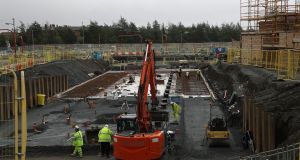 Redevelopment of O’Devaney Gardens: Dublin City Council is in the process of building 56 social homes on the site. Photograph: Nick Bradshaw

The redevelopment of the former O’Devaney Gardens flat complex by Bartra Capital is set to be blocked by Dublin city councillors on Monday, unless affordable house prices are reduced in the new estate.

While several councillors have called for the new estate of more than 800 homes to be kept in public ownership, agreement of the deal is likely to hinge on whether the cost of affordable housing is reduced, and on the provision of affordable rental homes.

The council is in the process of building 56 social homes on the site. Bartra has been contracted to build another 768 house and apartments, 411 of which would be sold privately by the developer, 192 would be used for social housing and 165 would be sold to qualifying affordable housing purchasers.

Dublin City Council’s head of housing, Brendan Kenny, said affordable homes would be available for sale at an average cost of €300,000 and that none would cost more than €320,000, the maximum qualifying price for the Government’s Rebuilding Ireland home-loan scheme.

Previously it had been suggested the O’Devaney Gardens affordable homes, close to the Phoenix Park in Dublin 7, would cost up to €420,000.

Fianna Fáil councillor Mary Fitzpatrick said her party would need to see the affordable housing “capped at €300,000” to approve the deal.

“O’Devaney Gardens has been lying idle for 15 years. I would be very reluctant to vote against it,” she said.

Labour councillor Marie Sherlock said her party wanted to see some element of cost rental or affordable rental in the new development. “Labour is not comfortable with the 50 per cent private, but the fundamental issue is that unless the city council is given access to resources, the extent that we can do what we would wish to do on public lands is extremely limited.”

Green Party councillor Neasa Hourigan said her party had yet to come to a decision but it would be “very difficult to vote in favour of a deal we don’t think is a good deal for the city”. She said she was also concerned about the make-up of the 50 per cent private housing and whether it might be sold “as packages” instead of to individual buyers.

While Fine Gael is set to vote in favour of the deal, the Social Democrats, People Before Profit and the majority of Independents want the housing to be kept in public ownership.

Independent Cieran Perry said there should be “100 per cent public housing on the site consisting of 70 per cent affordable rental and 30 per cent social housing”.

Sinn Féin councillor Janice Boylan, a former O’Devaney Gardens resident, last month made an impassioned plea for councillors to vote in favour of the deal .

“This is not the best plan that we could have delivered but it’s the only deliverable plan we have with a Fine Gael government on the table,” she said. “Constantly telling people we can deliver something more is lies. It is absolute lies.”

Her party had previously championed the council’s deal, but in recent days has said it will vote against it.

Mr Kenny said the deal “will have to be abandoned” if councillors fail to approve it on Monday.

Hitman to be sentenced for shooting drug cartel target next month 17:42
Shoppers spent more on Christmas 2020 than in previous year 17:36
Covid-19: Passengers may be required to pay for stay in quarantine 16:58
Coursing may not resume during Level 5 Covid-19 restrictions, judge rules 16:49
Man to be tried over threats to family of murdered Cameron Blair 16:44