‘Hate is always there. It’s all down to ignorance.’ 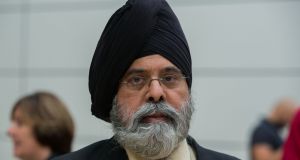 Dr Jasbir Singh Puri moved to Ireland from India in 1988, and he said it has been a rollercoaster of a ride from the very beginning.

Over the past 30 years, he has been called names, been referred to as a terrorist, had eggs and stones thrown at him and been told to “go home”.

The retired consultant, who now owns and runs an ethnic supermarket in Fonthill Retail Park in Dublin, is a member of the Sikh religion and he wears a distinctive dark turban.

“It’s all down to ignorance,” Dr Puri says. “They don’t understand. People fear me because they don’t know me. It’s the fear of the unknown.”

“There was one day I was in the petrol station filling the car and two children, eight or nine years old, threw stones at me and then they were laughing and then they ran away. It does happen, seeing a different person. It’s all because they don’t know,” he added.

Dr Puri said that racially-motivated crimes and hate is more common than people realise because most people do not report the incidents when they occur. He added that, from his experience, the prevalence of these crimes spike when the economy isn’t doing too well.

“Hate is there, and it always was there. Now, with the economy going up and down, these things are bubbling up. When people are busy with their work, they don’t be as hateful,” he said. “During the recession, people lost their jobs and people said: ‘Oh it’s because of them that we are suffering.’ It’s the first thing that comes into their mind.”

“I am a retired doctor, I have opened up a supermarket here. I’m employing more than 30 people and I’m giving jobs to people, putting money into the economy and still, sometimes they come to our shop and make scenes there sometimes. We try to ignore them and ask them to leave but it happens a lot.”

Dr Puri added that he “would not be surprised” if he and other people from different ethnic backgrounds experienced additional abuse if Brexit negatively affected employment.

“It could happen, I can’t say for definite but it could definitely happen,” he said.

He welcomed the new Garda diversity strategy published on Wednesday but said that it is very important that the force followed through with it, and that frontline members received proper education on ethnicity.

“This is a step forward,” he said. “But they need to teach more about ethnicity, within the training, about different societies, different nations. That will be much better.”