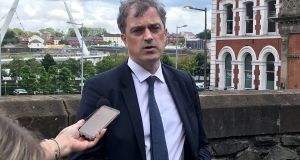 Northern Ireland secretary of state Julian Smith. ‘To those who lobby me to change the law, I say the only way is for Northern Ireland’s political leaders to form a government,’ he said. File photograph: Rebecca Black/PA Wire

The British government will proceed to legislate for abortion and same-sex marriage in Northern Ireland, the British secretary of state for the North, Julian Smith, confirmed to MPs on Monday.

Following appeals by church leaders in Northern Ireland to politicians to prevent the extension of British abortion law, Mr Smith told the House of Commons that if the assembly and executive were not restored by October 21st, the British government would follow the instructions of MPs and introduce the controversial reforms to the North.

He said that the Northern Ireland Office would shortly commence “an information campaign” to inform the public in the North about the impending legal changes.

“To those who lobby me to change the law, I say the only way is for Northern Ireland’s political leaders to form a government,” he said.

He rejected attempts by DUP MP Sammy Wilson to single out Sinn Féin as being to blame for the continued suspension of the institutions.

Mr Wilson said that his words “sound like a punishment to every party except Sinn Féin”.

Mr Smith said the Irish and British governments would launch a fresh effort to restore the Stormont power-sharing institutions, with another round of contacts with the parties likely to take place later this week.

Mr Smith told the House of Commons on Monday he intended to “work urgently with the Northern Ireland parties and the Irish Government to do everything I can to break the logjam . . . The time is now. The party leaders need to show leadership and do the right for the people of Northern Ireland.”

He said the quality of public services in the North had been harmed, and decisions affecting the lives of people in Northern Ireland had been delayed.

However, there is little hope of a breakthrough this week, despite expectations that the British government will suggest a role for Stormont in future proposals to replace the backstop.

Church leaders on Monday called on the political parties to reconvene the Stormont Assembly to prevent the introduction of abortion in Northern Ireland next month.

They issued a joint statement expressing “grave concern” at the prospects of Westminster imposing abortion in the North.

Mr Smith also told parliament there was a commitment to introduce a historical institutional abuse bill in Westminster “by the end of the year” in the absence of an executive.

Lady Hermon, Independent MP North Down, sought assurances on when such legislation would come forward, adding: “They have been enormously patient, they have suffered for too long, they have waited too long and they deserve compensation — when will it be?”

Mr Smith said he was “confident” the legislation could be brought forward in the “coming weeks”.

Deputy speaker Dame Rosie Winterton intervened saying: “I do feel the use of inflammatory language is absolutely unacceptable.”

MPs at Westminster passed a Bill last July stating that abortion will be decriminalised in Northern Ireland unless Stormont is restored by October 21st.

While abortion and same sex marriage – which are both legal in the rest of the UK – are devolved matters for the Northern institutions, MPs voted to impose direct rule from Westminster on the issues if there is no assembly running. - Additional reporting PA