Irish nuns had pensions stopped after moving back from Portugal 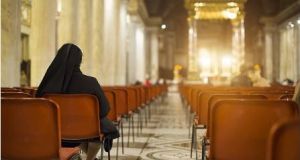 Pension payments ceased after three nuns closed their personal bank accounts in Portugal and requested that the money continue to be paid into the religious congregational account in Ireland. File photograph: Getty

Three Irish nuns who stopped receiving their pension for six months after moving back to Ireland from Portugal have had the payments reinstated following an intervention by the Ombudsman.

Ombudsman Peter Tyndall contacted his Portuguese counterpart in April of this year after he was informed that two nuns, who taught and cared for disadvantaged people in Portugal for decades, were no longer receiving their pension.

Mr Tyndall contacted the Portuguese ombudsman again in July after discovering that a third nun from the same congregation, who had also moved back from Portugal, had stopped receiving payments.

The payments ceased after the nuns closed their personal bank accounts in Portugal and requested that the money continue to be paid into the religious congregational account in Ireland. As the Portuguese authorities normally transfer pensions directly into personal accounts, the payments stopped.

The religious congregation brought the issue to Mr Tyndall, who examines complaints from the public who believe they have been unfairly treated by certain public service providers, after the Portuguese authorities failed to reply to letters, emails and phone calls requesting that the pensions be restored, according to a spokesman for the Ombudsman’s office.

Following “considerable interaction back and forth” in order to identify the women and produce the necessary documentation in English and Portuguese, the pension payments were reinstated for the first two nuns in August. They were also sent the arrears they were due for the six previous months.

Payments to the third nun are expected to be restored with the necessary arrears in the next month, a senior investigator from the office of the ombudsman said.