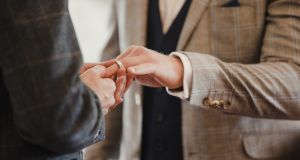 The five Catholic Bishops of Northern Ireland have called for protections from charges of discrimination for members who refuse to officiate at same-sex marriages or facilitate same-sex couples with marriage preparation.

Responding to the Northern Ireland Office Consultation on what is termed “Religious Same-Sex Marriage”, they welcomed proposed laws which make it clear religious bodies cannot be compelled by any means to be involved with same-sex marriages.

They also welcomed proposed equality law protections whereby “religious bodies and individual officiants do not unlawfully discriminate if they refuse to solemnise marriages because of the sex or sexual orientation of the couple.”

Proposed amendments to the law, which would provide that criticism of same-sex marriage will not be an offence and that people would remain free to express their views so long as this is not done in a threatening, abusive or insulting way, were also welcomed by the bishops.

At the heart of the current consultation, they said, was “the obligation on the State and its legislators, recognising the vital importance of respect for freedom of religion, expression and conscience, to respect and protect the proper autonomy of Churches and their respective governing authorities regarding marriages solemnised by those Churches.”

No religious body “or person acting on behalf of such bodies should be compelled to undertake specified activities relating to same-sex marriage,” they said, noting this was “in keeping with the fundamental right to freedom of religion and conscience” and consistent with the European Convention on Human Rights.

They sought assurance that Catholic Church agencies would not “be compelled to provide marriage preparation, relationship counselling or other marriage related services in respect of those contracting same-sex marriage, should they believe it is inconsistent with their religious belief to do so.”

They asked for “explicit provision” to protect faith-based organisations which provided services in support of marriage and the family “from being discriminated against in access to public funds because of their beliefs in respect of same-sex marriage.”

Committed Catholics “cannot be asked or expected to create a false division between their faith and their public, professional life” they said, and believed this should also be recognised.

They noted that the UK Supreme Court ruled in the Ashers Bakery case that people cannot be forced to promote a message they fundamentally disagreed with. They asked the Northern Ireland Office to publicly comment on the implications of this case “for their proposals in this area.”

In light of the case, the bishops argued that in being forced to provide a service which “de facto promotes same-sex marriage” some, such as civil registrars and others, were at least indirectly being compelled to act against their religious beliefs.