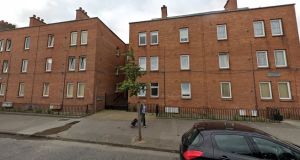 Dublin City Council said it would not go ahead with the planned transfer of lands for the redevelopment of James McSweeney House, a senior citizens’ complex on Berkeley Street, to Cabhru Housing Association Services, until recently known as the Catholic Housing Aid Society (Chas). File photograph: Google Street View

A well-known housing charity, which provides homes for senior citizens in Dublin, is under investigation by Dublin City Council amid claims against the chief executive, who recently resigned.

The council said it would not go ahead next month with the planned transfer of lands for the redevelopment of James McSweeney House, a senior citizens’ complex on Berkeley Street, to Cabhru Housing Association Services, which was until recently known as the Catholic Housing Aid Society (Chas).

It has instead initiated an investigation into the governance of the organisation and “certain claims” made against its former chief executive, Miceal McGovern.

Mr McGovern resigned on February 14th. When contacted by The Irish Times he said he had been asked not to speak about the matter.

In 1982, the council granted a 99-year lease to Chas for the construction of James McSweeney House. In October 2018, the complex came to the council’s attention when it emerged Chas had begun renting the Berkeley Street flats to students, after asking elderly residents to move out so the building could be redeveloped.

Students were charged €800 a month for the one-bedroom flats, almost 3½ times the social housing rent paid by the elderly residents living in the complex. Chas subsequently agreed with the council to stop renting flats to students.

Last August, Chas secured planning permission for the redevelopment of James McSweeney House. However, in order to secure a loan from the Housing Finance Agency, the housing association needed to secure full title to the site.

The council management was due next month to ask councillors to approve the transfer of the title to the association. However, its head of housing Brendan Kenny said, this will not now take place.

“This will not be put to the councillors for approval next month. Certain claims have been made against the chief executive, and a process of investigation into these claims, and into governance issues, is now under way.”

Mr Kenny said he was not in a position to elaborate on the nature of these claims . He said it could not be determined at this point if the title would at any point in the future be transferred to Cabhru/Chas, as the investigation was ongoing. He said he could not comment on the prospect of the future redevelopment of the complex.

A spokesman for Cabhru said the board was undertaking a “thorough investigation of the procedural items raised with us” but was not in a position to outline these issues. “We will be preparing a report for the Charities Regulator and as a result we are not in a position to talk about these issues. However, if there are matters that have to be acted on they will be acted on.”

Independent city councillor Mannix Flynn said there needed to be a “full and independent inquiry” into the activities of the organisation.

“This is a highly irregular situation that is being cloaked in secrecy,” he said. “The council should not dispose of any land here, not only next month, but not at any time in the future.”

In 2014, Chas was involved in a seven-month rent dispute with the city council over Fr Scully House, a €17-million complex of 99 apartments near Mountjoy Square.

The society wanted to charge an average monthly rent of €580 for the apartments, but the council had argued the average weekly rent for housing built under the State-funded capital assistance scheme was €66-€68. Following the intervention by Minister for the Environment Alan Kelly, Catholic Archbishop of Dublin Diarmuid Martin and the Housing Agency, rent agreements were reached.