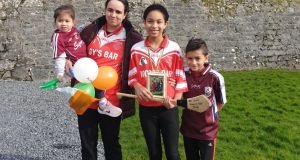 The father of an undocumented Brazilian family living in Athenry, Co Galway is set to be deported from the country on Tuesday, just days after his eldest daughter’s 12th birthday.

Lucivaldo Araujo da Silva was arrested on February 2nd on foot of a deportation order and is currently being held in Cloverhill Prison.

Ms Martins Ribeiro said immigration officials had informed her both she and her daughter Stephany were subject to deportation orders.

The family have been living in Ireland undocumented for over a decade, the father works as a painter and the mother works in Athenry town. “Athenry is their home,” she told The Irish Times.

In 2004 a referendum to remove the automatic right to citizenship of children born in the country to non-Irish parents was passed by a large majority.

Speaking on her 12th birthday on Sunday, the eldest child Stephany said the weeks since her father had been arrested had been “awful” for the family.

“I’m from Athenry, they told me I have a deportation order, I’m very confused,” she told The Irish Times.

“I have never stepped my foot out of here, I’ve spent my whole life here. I was born in Galway hospital. I’m a Galway girl from the fields of Athenry. I don’t want to go to Brazil,” she said.

Celebrating her birthday while her father was in prison facing deportation was “lonely,” she said. “He is a wonderful person, he does not deserve to be in prison,” she said.

Barrister Lorraine Lally is preparing to file a legal challenge on Monday on behalf of the family, to try to prevent Mr Araujo Silva’s deportation.

“We’re ripping families apart…I’m appealing for the Minister of Justice to show compassion,” she said.

The policy of deporting children who had been born and lived their whole lives in Ireland was “incomprehensible,” she said.

“It’s heartbreaking to see this Athenry family on the verge of being torn apart. I spoke to the Minister for Justice Charlie Flanagan on Thursday about the case and wrote to him on Friday seeking an intervention on humanitarian grounds,” she said.

“This family is much-loved in the area and their friends and neighbours are rallying around them to try and save this family,” Ms Rabbitte said.

The Department of Justice had not responded to queries for comment on the Ribeiro family’s case at the time of publication.