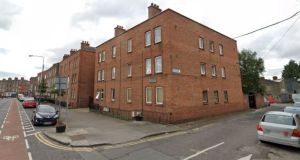 The recently resigned chief executive of a Dublin housing charity was living with a family member in a social housing flat complex intended for senior citizens, the head of housing with Dublin City Council has claimed.

The council is to move to take control of the James McSweeney House complex from housing association Cabhru, following controversy over the operations of the organisation.

Brendan Kenny, head of housing with the council, said support for the redevelopment of the complex by Cabhru, known until recently as the Catholic Housing Aid Society (Chas), had been withdrawn.

He said the organisation would be asked to surrender its 99-year lease on the Berkeley Street site, which is near the Mater hospital.

Mr Kenny said the council would undertake to rebuild the complex itself at an expected cost of about €10 million.

The activities of Cabhru, one of Dublin’s most prominent senior citizens housing organisations, have come under scrutiny following the recent resignation of its chief executive, Miceal McGovern.

Mr Kenny said the claims brought to the attention of the council included that Mr McGovern had taken a flat in the complex for this own personal use, and had allowed a family member to live in another flat.

Mr McGovern resigned on February 14th. When contacted by The Irish Times earlier this week, he said he had been asked not to speak about the matter. He did not respond to a number of requests for a comment on Tuesday.

In 1982, the council granted a 99-year lease to Chas for the construction of James McSweeney House. The organisation last year secured planning permission to demolish and rebuild the complex.

However, in order to secure a loan from the Housing Finance Agency, the housing association needed to secure full title to the site.

Council management had been due to ask councillors to approve the transfer of the title to the association next month. Mr Kenny said this would not go ahead now.

“We have withdrawn our support for the project and will this week formally request that the organisation surrender the 99-year lease,” he said, adding that the situation had raised issues of “credibility and trust” with the organisation.

“This complex was built for social housing purposes and that is the only purpose for which it should be used. It was brought to our attention that Mr McGovern was using some units for himself and his family. This is unacceptable and we are very disappointed this has happened.”

Mr Kenny said he would be asking the charity to transfer ownership of James McSweeney House to the council “at no cost to the council” along with all plans and designs for the new complex. “The plans are for 35 new units and we would expect it would cost us €250,000-€300,000 per unit, but we do believe this is the best solution at this point.”

He said he was confident the board would be anxious to work with the council on this matter, so it could continue to provide services for the elderly.

“I understand the board is very embarrassed by what has happened. It is going to have to take stock of the organisation and it will have to build up credibility and trust again to continue with its activities,” he said.

“We are asking them to urgently address the issue of how the organisation is run. On a wider issue, it is very important that the credibility of the AHB [approved housing body] sector is not damaged.”

The board of the charity did not respond to queries on Tuesday, but has previously said it is preparing a report for the Charities Regulator on the issues raised.

James McSweeney House previously came to the attention of the council in late 2018 when when it emerged Chas had started renting the Berkeley Street flats to students, after asking elderly residents to move out so the building could be redeveloped. Students were charged €800 a month for the one-bedroom flats, almost 3½ times the social housing rent paid by the elderly residents living in the complex.