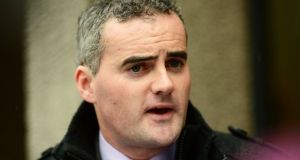 The Department of Justice has denied an Offaly councillor’s claims that asylum seekers are “leapfrogging” other people on social housing lists or that it issues directives to local authorities to expedite the housing of foreign nationals.

He also highlighted what he said was an example of social houses in Birr being offered to “asylum seekers” ahead of local people who had been on housing waiting lists for years and said families from Syria had been “parachuted into houses ahead of our own”.

Mr Leahy was speaking after an announcement by the Department of Justice that the former Marian Hostel on High Street in Tullamore is to be converted into a direct-provision centre to accommodate up to 168 asylum seekers.

The centre will open early next month and will have cooking facilities and a food hall for residents.

Mr Leahy described the plans as a joke and said asylum seekers would ultimately gain faster access to limited services and social housing.

He said there were “people coming into direct provision and then when it comes to housing and healthcare getting ahead of people who have been here a lifetime. I would welcome people coming into the country and I agree with the refugee programme but there has to be a better way than to pit one culture against another.”

He said housing officials on Offaly County Council had highlighted to him the case of four houses in Birr which were ready to be allocated as social housing “when a directive came from the Department of Justice to say there were putting people into two of them”.

“I asked how this could happen and was told that Justice can supersede everything – housing, planning, GP lists. A GP’s practice can be at full capacity and be issued with a directive from Justice saying they must take certain patients,” he said.

A spokesman for the Department of Justice denied that any directive had been issued to Offaly County Council and stressed that it was not possible for asylum seekers to leapfrog others on the social housing list.

“The department can confirm that asylum seekers are not eligible for social housing,” a spokesman told The Irish Times. “This is because they do not meet the eligibility requirement of being long-term resident in the State. Asylum seekers have a temporary right of residence while their claim is being legally examined.”

The spokesman said that if an asylum seeker receives a positive decision on their application “they can access State services and supports including housing on the same basis as everyone else”.

“They do not receive any priority and many access private housing through the HAP scheme.”

The spokesman added that under the Irish Refugee Protection Programme, refugees (mainly Syrian families) are resettled to Ireland under the UNHCR-led resettlement programme.

“These families, who have refugee status immediately upon their arrival, are initially accommodated in an emergency reception and orientation centre before being settled in communities across the State,” he said.

“This process involves the City and County Manager’s Association and the local authorities. The Department of Justice and Equality has never issued any ‘directive’ in relation to housing for refugees or asylum seekers.”

Gardaí question man over fatal assault in Co Tipperary 10:29
Coronavirus: Assessment hubs to be set up around Ireland to deal with Covid-19 patients 10:26
Éamon Ó Cuív: There is concern within FF about government with FG 10:06
Man (27) arrested in Robbie Lawlor investigation released 08:43
Boy (5) dies in farm accident in Co Roscommon 07:41