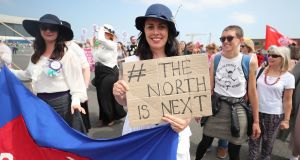 Members of the Together for Yes Campaign call for abortion reform in Northern Ireland. Photograph: Niall Carson/PA Wire

The Republic of Ireland is apparently heading for hell and Northern Protestants have no intention of being dragged down that primrose path, according to a contributor to the current issue of the Church of Ireland Gazette.

In a letter, Rev Alastair Donaldson of Derrylin, Co Fermanagh, says: “I believe the decision of the majority of the Republic of Ireland electorate to repeal the Eighth Amendment was yet another sign of the spiritual malaise in that country and a determination among many to deny God’s word.”

Rev Donaldson makes no reference in his letter to those other countries in Europe where the availability of abortion is far more liberal than anything anticipated “in that country” following last month’s referendum.

Nor does he “naively subscribe to the overconfidence of many from Northern Ireland that permissive abortion legislation could never be introduced here”.

But he was most disturbed to feel that at the Church of Ireland General Synod in Armagh last month an underlying assumption was that “our denomination could overall be neutral on such a crucial vote –- a vote about life itself”.

But the Church of Ireland, which represents the largest Protestant denomination on the island of Ireland, was far from neutral on the referendum. On this, as on same-sex issues, its bishops are divided and primarily along North-South lines.

Two of its bishops – Bishop Michael Borrows of Ossory and Bishop Kenneth Kearon of Limerick – publicly called for repeal of the Eighth Amendment while the church’s two archbishops called for a No vote. Last weekend, Bishop of Cork Paul Colton said he voted Yes to repeal.

This change of position prompted former Archbishop of Dublin John Neill to also write to the Gazette. Last April he pointed out that the church’s “agreed position was always that the questions surrounding abortion should be addressed by legislation and not by constitutional provision”.

It is believed the change was prompted by Archbishop Jackson, a Northerner from Lurgan, Co Armagh. He was Bishop of the cross-Border diocese of Clogher and based in Enniskillen for almost 10 years – where a Church member was the now DUP leader Arlene Foster – before he became Archbishop of Dublin in 2011.

At the Church’s General Synod in 2012, he proposed a motion reaffirming its traditional teaching on marriage as “of one man with one woman”, along with Bishop of Down and Dromore Harold Miller.

Among the bishops who opposed that motion were Bishop Michael Burrows and Bishop Colton. Since then, the issue has successfully, and in the best Anglican way, been talked into the ground culminating in a statement from the House of Bishops last month that “there was little appetite” to discuss it further in parishes.

The Church of Ireland has about 375,400 members in total, 249,000 of whom are in Northern Ireland and 126,400 in the Republic. Its Northern membership is far more conservative, as are its Northern bishops, including those born in the North but now ministering in the Republic.

It is believed this Northern dominance is why its Archbishop Clarke, a Dubliner who would be perceived as liberal, now tends to follow the will of the Northern majority in public pronouncements.

At the General Synod last month, there was a surprise ambush by the Northerners when a bill was presented – without warning – which proposed reducing the number of delegates, and so strongly weighting decisions against the church’s smaller southern membership. Following intense discussion, it was withdrawn.

They described Government proposals 'for unrestricted access to abortion up to 12 weeks' as 'regressive, incompatible with human dignity and morally unacceptable'

Then there is the Presbyterian Church, with a total membership of more than 225,000 members, just 13,000 of whom live in the Republic.

They described Government proposals “for unrestricted access to abortion up to 12 weeks” as “regressive, incompatible with human dignity and morally unacceptable”.

They said “meaningful protection for the unborn can only be secured if the Eighth Amendment is retained in the forthcoming referendum”.

That, as we know, did not happen. And last week the Presbyterian General Assembly in Belfast declared same-sex couples could not be church members, in the proper sense, nor could their children be baptised.

A chasm has opened not only between a great majority in the Republic and the Catholic Church but also with the Northern-dominated Protestant churches in Ireland on same-sex and abortion issues, as illustrated in the 2015 same-sex referendum and the Eighth Amendment referendum last month.

It has made for surprising bedfellows.

DUP leader Arlene Foster has said that, following the May 25th referendum in the Republic, that Catholics – nationalists and republicans alike – contacted her to say they were prepared to vote for the DUP because of its uncompromising stance against abortion.

DUP MP Ian Paisley junior tweeted that he had received “a letter from a local priest in my constituency thanking the DUP for its stance on these issues and assuring me that he is urging his parishioners to vote DUP because of the stance we take on social matters”.

Northern Ireland is the only jurisdiction in these islands not to have extended civil marriage rights to same-sex couples and, when the Republic introduces its new abortion law, it will be the only part of Britain and Ireland with severely restricted access to abortion unless the courts in London rule otherwise.

What this has given rise to on same-sex and abortion issues is the rather odd situation, historically speaking, whereby Northern Protestant unionists and their most hard-line politicians strongly support Rome rule.