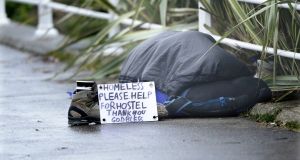 Lone parents, non-nationals and families with four or more children are “massively over-represented” in homelessness, a landmark report published on Thursday shows.

The report, from the Dublin Region Homeless Executive (DRHE), also underlines the huge reliance of homeless services on the private-rented sector to house homeless families, and the provision of the Homeless Housing Assistance Payment (HHAP) to access housing in the sector.

HHAP, introduced in 2015, allows homeless households to pay a higher rate of rent to landlords than allowed for under the normal HAP rent support scheme, and to have their first two months’ rent paid up-front.

The report’s author, Dr Bernie O’Donoghue-Hynes, however said the rate of new presentations to homeless services in fact doubled last year compared with 2016, but about half of 2017’s new presentations could be diverted away from emergency accommodation by being granted the HHAP instantly.

This has enabled the DRHE to bring the overall increase in homeless families last year down to 93, compared with about 350 in 2016, despite a surge in new presentations.

“Dublin has been able to slow down the rate predominantly because of increase of allocations and sourcing of tenancies for families experiencing homelessness,” Dr O’Donoghue-Hynes added.

Of the 719 families, that had been homeless in 2016 and 2017 and had exited homelessness by February 2018, some 368 went into HHAP tenancies, 216 into local authority housing and 135 into housing association tenancies.

Of the 976 families new to homelessness last year – including 1,315 adults with 1,949 children – two thirds (627) were headed by lone parents. This compares with 24 per cent of families in the general population.

Most of the children/dependents in homelessness were attending primary school, though seven per cent were over 18.

The two main reasons families came into homelessness were leaving private-rented accommodation (48 per cent) following a notice to quit, and family relationship breakdown or overcrowded conditions (49 per cent).

“Many of the families in overcrowding had previously been in private rented, had moved back in with family thinking they could resolve their homelessness situation and when it didn’t work out ended up in homeless accommodation. So the private rented is still a feature,” said Dr O’Donoghue-Hynes.

She said there was “no evidence” of families “gaming the system” – despite a claim last year by chair of the Housing Agency, Conor Skehan, that families could be presenting as homeless when in fact they had somewhere to live, in the belief they would be prioritised for social housing.