‘Mum, I’m worried about deportation. I don’t want to go’

Sofia and Mariam have never left Ireland, but fear being sent to their mother's homeland of Georgia 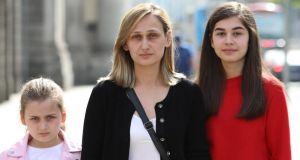 Sofia is eight and excited about making her First Communion. Like her friends, she has been absorbed in a world of white dresses, shoes and parties for her special day. Her big sister, Mariam, who is 13, has just started secondary school and loves it.

Today both girls are solemn and subdued as they sit quietly at a table in a cafe. Mariam is doing her homework. A Harry Potter book lies on the table alongside the homework copy.

Neither girl has been outside Ireland, and neither has been to Georgia. The girls were born in Ireland and, after spending several years in direct-provision hostels, now live with their mother in an apartment in Dublin.

Lela is beside herself with desperation. Her stress is palpable. She has decided to tell her story because she fears her small family will be picked up by immigration officers and brought to Dublin Airport to embark on a new life in Georgia, a country her children know little about and where people speak a language they don’t understand.

Lela was 21 when she came to Ireland, in 2003. She married a fellow Georgian here in 2005, and the children were born. Lela’s husband was deported in 2011, but she was permitted to stay.

Her parents organised for her to come here 15 years ago.

She says her mother was in contact with a man who organised everything and told her to say she was 16, her parents were dead and she was fleeing an abusive stepfather. None of that was true, but Lela says she was too young and naive to think about the possible consequences of lying on her asylum-application form.“It was the end of my normal life since the day I said that lie,” the 36-year-old says.

There were many times she wanted to disclose the lie to the authorities, she says, but she was too fearful. Lela eventually admitted the lie during court proceedings unsuccessfully aimed at preventing her husband’s deportation.

Her admission led to a deportation order for her and the children that is now the subject of a High Court challenge.

In 2008, her fifth year here, she was given permission to remain for another three years as an exceptional measure.

The following year Sofia was born. In 2012, Lela’s husband was deported for reasons including that he had lied during the asylum process.

His deportation caused great upset, particularly for Lela, who lost her main support, and Mariam, who was old enough to have developed a close bond with her father.

In 2014, Lela’s permission to remain was renewed on the same terms. In the context of her husband’s deportation she had initiated proceedings challenging the constitutionality of section 3 of the Immigration Act. Those were rejected by the High Court and, during an appeal to the Supreme Court, Lela disclosed that her asylum application was also based on an untrue story. The Supreme Court dismissed the appeal.

In March 2015, Lela was informed by the minister for justice that she intended, because of the disclosure that Lela gave false or misleading information during her asylum and immigration history here, to revoke her permission to remain.

In July 2015 the minister notified Lela that her children’s position would stand or fall with hers.

Lela says she is particularly concerned about the effect of the uncertainty on her children, especially Mariam.

“It is really hard. I am 24 hours thinking about it. I see Mariam suffering. She has lost lots of weight the last few months. She doesn’t want to go out or bring anyone home, and she says, ‘Mum, I’m worried, worried about deportation. I don’t want to go anywhere.’

“Mariam knows Irish culture, she does karate and ballroom dancing, everything. She loves her life here and her friends. She thinks she’s Irish. Sofia is the same.”

Lela has her own worries. “I suffer from fibromyalgia, with all the worry and stress the last few years. I am just half a person.” She says she has a job offer but cannot work because she is undocumented. “I did lots of language courses here, childcare. I would like to work if I had a chance . . .

“If we go back we will be sleeping on the streets. This suffering is endless. It’s easy for judges and immigration to say that’s it, but what’s behind is human. I didn’t decide any of this; it was decided for me.

“I wish they would take into consideration the children. They are not immigrants; they are born and raised here. I am so tired of these problems. If I was 80 it would be all over and I would have peace of mind. It’s mental torture.”

Footnote: On Friday June 8th the judge hearing this case indicated that he intends to quash the deportation orders. He adjourned until Tuesday 12th, to allow the Minister for Justice to consider the position.